Moving on from something like sexual abuse doesn’t mean that everything suddenly becomes happy. Sometimes, the only way to deal with trauma is to stay in the sadness.

It was innocent at first — he was like an older brother to me, and as an only child, I had always been a little envious of my friends with protective older brothers. After a year, our relationship changed. He started to touch me in ways an older brother should never touch his sister, and I was too naive to recognize what was happening.

Growing up, I strived to be the good Christian girl. I served on the worship team, prayer team, and servant team at church, but I felt like the biggest hypocrite. I carried a tremendous sense of guilt and shame because I knew I was engaging in something "sinful", yet internally I defended him because he said he loved me, and somehow that made what he did OK. I hated myself for allowing it to happen over and over again, but I ultimately felt trapped in this cycle with no way to tell anyone what was happening. If anyone ever found out, I would become like the pariah bearing the scarlet letter. No one could ever know.

I ultimately felt trapped in this cycle with no way to tell anyone what was happening... No one could ever know.

After my 18th birthday, he moved away, but he still visited me. That ended shortly after I went to college later that year. I wanted to forget everything that had happened and start over in a brand new city with brand new friends.

I couldn't understand why I was sad. I wanted to tell my friends so I could stop hiding, but shame prevented me from sharing. My sadness just didn't belong at school, youth group, or boba hangouts. I was caught in a state of ambivalence — wanting to be known — but afraid that if others knew, they would see me as the horrible person I thought I was. I hated myself for not being able to get out of my mess. I couldn't understand why he chose to move away. Or why he couldn't stop what he was doing. The older brother I had desperately wanted was gone, and yet I still felt somewhat relieved. I no longer had to fear being caught in this secret relationship. He was gone.

The first person I shared this with was Henry. He had been pursuing a relationship with me for a couple of years and I thought maybe he'd quit if he knew the truth. He didn't quit. In fact, he convinced me to give him a chance, and I finally agreed to date him.

There were many confusing dynamics in our relationship. Even though I had agreed to be his girlfriend, I held him at arm's length and was almost ashamed of letting the public know that we were dating. I wanted to be in control of this relationship. I refused to ever again be in a situation where I didn't have the upper hand. I was suspicious whenever he expressed his affections for me. I'm sure people wondered if I had any feelings for him at all. I certainly wondered.

I refused to ever again be in a situation where I didn't have the upper hand.

Around the time when the Pennsylvania State University football coach scandal broke out, I took a family communication class that discussed sexual abuse. Then a Campus Crusade for Christ staff member blogged about her own story.

Suddenly everything came together for me. The story I had desperately tried to bury in the past but kept haunting me, was a story of sexual abuse. I was devastated. Suddenly everything made so much sense, but at the same time nothing made sense. I had been fed a lie about love, and yet my memory was saying no, it was real. I was there. I know it was true.

I spiraled into a long period of depression and anger. Was I just another "victim" in a sexual abuse case? Had he meant any of the things he said to me? Had I been subconsciously clinging to his empty promises? I realized I loved him. I felt disgusted and foolish and heartbroken. Even while I was dating Henry, I grieved like someone who had just broken up with her boyfriend. Outwardly, I was celebrating senior year and living life in "you only live once" mode, but inwardly, I was turning into someone who I didn't want to be around.

Was I just another "victim" in a sexual abuse case? Had he meant any of the things he said to me?

I fumbled my way through trying to heal and get over it all. I tried to rip off the band-aid and tell people, while simultaneously wanting to withdraw from the world. No one really knew how to engage in this type of conversation or help me process it. There was a lot of well-meaning advice, but the only real solution anyone had was for me to see a counselor.

There's a lot of shame in our society around seeing a counselor, and it's rare for Asians to acknowledge that they have a problem that needs to be addressed, especially one that required counseling. I was no exception. I was skeptical of paying someone to listen to me talk or watch me cry as a way to truly help me navigate through my emotions.

Then I heard someone wise say, "We invest thousands of dollars in our education and degrees without question; doesn't it make sense that we would invest even more in our souls?" I was finally convinced and ready to try counseling.

"We invest thousands of dollars in our education and degrees without question; doesn't it make sense that we would invest even more in our souls?"

I wanted to be done with the complexities I was living in. I wanted to move beyond this exhausting sadness. However, this was not something where one big cry would be cathartic and free me from my pain. Just as Joy kept trying to shove Sadness aside in the movie "Inside Out", I wanted to decrease my own sadness. I wanted to be free from it. I had no room between work, new friends, and learning how to be an adult to truly process the betrayal, heartbreak, and shame.

But just as Joy could not keep Sadness confined, I finally realized that I needed to give myself the time and space to dissect my pain. Counseling was a safe space for me to talk to someone without the need to pretend or hide, and I wouldn't be alone with my thoughts. I would have a constructive voice helping me make sense of my life, and recognize that there was hope for my future despite everything that had happened.

I finally realized that I needed to give myself the time and space to dissect my pain.

I have been married to Henry for over a year, and even though the pain has never completely gone away, I have experienced much healing. Yes, some of it even came to me through counseling. But I don't believe that there's a true endpoint to the healing process in this life. After all, we are all broken people who need to rely on God's grace and mercy every day.

I cannot escape the consequences and effects of sexual abuse that have shaped my behavior in certain ways, but I can trust in the hope that God has shown me. God has been working through my marriage to redeem me and show me His perfect design for love. He has taught me that I can love someone, and that I am not too far gone to be in a "healthy" relationship. He has shown me what it means to be interdependent with someone, and to recognize when I am being self-destructive (or marriage-destructive).

I no longer carry around my sadness like a heavy cloud of rain; it is no longer an emotion I feel the need to move on from. And while I may not always feel like a bright ray of sunshine, I don't have to fear that I've somehow become this dark, twisted person who doesn't know how to be happy. I don't need to crush all of my unhappy feelings in order to be happy. Embracing sadness has shown me that the joy I strove for was superficial and empty compared to the joy I could have had if I allowed myself to connect with my more painful emotions.

Embracing sadness has shown me that the joy I strove for was superficial and empty compared to the joy I could have had.

Although I struggle with this embrace at times, I know that my experiences — and even sadness — allow me to fully experience the healing and joy God has in store for me.

*Name has been changed to protect her identity 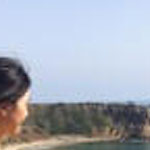 B. Zhan is a born and bred Southern Belle — sweet tea runs through her veins! She is an human resources professional who loves employee development and process improvement. Her other passions include boba, a golden corgi mix named Cheeto, traveling, food, and collecting shoes and bags.