Finding My Name in the Family Book

Part of 6 of in
By Sara Wolfgram Chang
Illustrations by Camily Tsai
May 01, 2017 | min read
Part of 55: This Adopted Life
40 Snaps
40 0 Snaps
Oops! Something went wrong while submitting the form.

A mentor once told me, “Sara, you can’t out-dream the plans God has for you.” I slowly nodded back as waves of dissonance washed over me. Truth had collided with my functional theology. Did God have plans and dreams for me?

These words came in the midst of the most difficult season of my life. On one hand, one could say I had it all — an amazing husband, a job that I loved, friends, mentors, and even two cats. On the other hand, I was limping, broken, and reconstructing.

Three years ago had begun what I had thought might be the best years of my life. My husband and I had just begun dating and, yes, we were one of those couples who knew we wanted to get married within a week of knowing each other. You can imagine the initial collective ripples of shock that travelled through our communities, but their shock mostly turned into excitement and joy. My parents were thankful to be welcoming a fellow introvert and avid reader to the family, not to mention, someone with a compassionate heart.

As Robert and I began dating, one of the things I was aware of upfront was that it would be challenging for his parents to accept me. Robert is a second generation Korean American and, as I quickly learned, comes from a prominent Korean family that can trace their genealogy back over 900 years. They even have the books to prove it.  This multiple volume set carefully records each member’s name with short eulogies. There is a high level of pride about who is eligible to be included in this family line, the highest criteria being one who comes from a well-established Korean family.

But then there’s me. From what I know, my biological mother placed me in a basket on the doorsteps of a police station in Seoul, South Korea, with a note that read, “Please take care of my baby.” Whereas Robert’s family of upstanding pedigree and meticulous annals know each member by name, it is impossible for me to trace my lineage back even a generation. One might ask, “What kind of family or people would leave their daughter in a basket?” For the traditional Korean family, one could conclude it was a family of low status, worth, and honor. In the eyes of his ancestors and parents, my name, Sara Wolfgram, was unfit to be recorded next to Robert’s in a book such as theirs.

Whereas Robert’s family of upstanding pedigree and meticulous annals know each member by name, it is impossible for me to trace my lineage back even a generation.

After being brought to a nearby orphanage, I was mercifully adopted at 4.5 months old into a loving and nurturing family living in the States. As an only child to a librarian and carpenter, North Carolina is where I began to carve out my identity as a Korean American transracial adoptee. I played flute, lived and breathed soccer, wished I had double eyelids like everyone else around me, and skipped Sunday School to hang out with friends until I finally got permission to quit church. Dating, much less marrying, a Korean guy was not something I envisioned in my future.

Yet, somehow Robert and I fatefully met. When his parents discovered he was serious about marrying me, Korean dramas took on a new relevance. They became reality. If I were to have written this a few years ago, there is no doubt in my mind that my account of the two years leading up to our wedding day and the three years following would be framed through a lens of bitterness, resentment, and pain. What I can say though, is that those five years of intense physical, emotional, and spiritual struggle have done more to challenge and shape my identity as a Korean American adoptee and follower of Jesus than anything else in my life.

Up to the point of meeting Robert’s parents, I saw my adoption as something that was generally neutral with bouts of negativity here and there. Yes, I yearned to meet my biological parents and struggled to find my place in predominantly all-white settings, but I had yet to experience discrimination or persecution on behalf of my Caucasian parents and unknown Korean birth parents.

Once it was explicitly expressed that I was an unsuitable match for Robert, something inside me snapped.

The rejection I experienced for being an adoptee struck a new blow to my identity. Hidden desires began to surface as I gasped for air that would sustain my fragile sense of worth. Some kids dream about going to the Olympics or visiting Harry Potter World. For me, my dreams were simpler than that. Tucked neatly underneath more “normal” dreams were ones of traveling to South Korea, learning how to prepare blended grain rice (not just boring white rice), being introduced to the best K-beauty products, and owning my own hanbok (한복).

Although it was hard to admit, I desperately wanted a Korean family, and especially a Korean mother who could show me those things. But it wasn’t that simple.

Somewhere in between the two years before we got married, God asked me who I would allow to define who I am. When I was younger, it was my parents. In high school, it was my friends. In college, it was who I thought the Christians around me wanted me to be. Years after graduating I found myself wrestling with perhaps life’s most fundamental question. At the end of the day, I realized that the only person who hasn’t or won’t ever leave me is Jesus. He was with me in my basket. He was with me even when I rejected him in high school. He was with me in my spiritual journey throughout college. He was with me in this struggle to join a family that saw me as subpar.

God asked me who I would allow to define who I am.

As a result, it had to be Him. I am not unlovable. I am not just an orphan. I am a daughter of the King who folds me into His genealogy that extends to the beginning of time. I have a Father who has adopted me into His family regardless of my circumstances. It was this realization that enabled me to change my heart toward those who had hurt me most.

Our wedding came and went with little change in our relationship with Robert’s parents. Robert had not set foot in his parents’ house for over five years, but those around me remained encouraging. “Just have a son” they said, and everything will be alright. Easier said than done!

I have to admit that when we found out we were having a baby I was not excited. Yes, we were hoping to get pregnant, but as the reality set in I found myself nervous about what that would mean for my future career in ministry. The real point of honesty came when we were at our 20-week ultrasound. I will never forget when I heard the technician say, “It’s a girl!” My heart sank and I felt deep disappointment. My prayer for the next 20 weeks was, “God, please just let her be cute.” At least if she be cute, we may have a small chance at reconciliation.

“It’s a girl!” My heart sank and I felt deep disappointment.

Little did I know the role that my daughter would play. Junia was born five days after my birthday, and it’s hard to imagine life without her now. I will never forget Christmas 2013. Robert’s parents invited us to their home for the first time; we entered through unlocked doors. Just as the Prodigal Son was given a robe, ring, and the fatted calf, I was given my mother-in-law’s cashmere sweater, gold rings, bracelet, and the best Korean food I have ever eaten. Robert received a gold necklace that he hasn’t taken off since his mother placed it on his neck.

And Junia? Her haraboji (할아버지) declared that both her and my name would be added to the family book in its next edition — something I had never imagined would happen.

Since then, life with my in-laws has been one of the most complex yet fulfilling relationships I have developed. While many of my simple dreams have been fulfilled, what this season in my life has taught me is that the words of my mentor are indeed true. You cannot out-dream the plans God has for you … and He’s still planning. 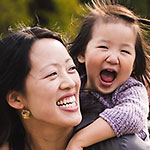 Sara Wolfgram Chang lives with her family in Ann Arbor, MI and is an Area Director with InterVarsity. She is pursuing a MDiv at Fuller and has recently become a ski and barre enthusiast.