From Helper to Guest

Confronting the Complex Nature of Privilege in Solidarity Work

Part of 3 of in
By Kristine Chong
Photography by Aaron Huang
Aug 01, 2017 | min read
Part of 57: The Power Within to Create the World Anew
19 Snaps
19 0 Snaps
Oops! Something went wrong while submitting the form.

Ten years ago, I served as an AmeriCorps VISTA (Volunteers in Service to America) at a refugee resettlement office in San Diego. Begun in 1965 as a domestic counterpart to the Peace Corps, VISTA is a national service program that connects volunteers to anti-poverty organizations. Ranging from service providers that connect people to public benefits, to advocacy groups that push for policy changes to reduce poverty at structural levels, VISTA site placements are diverse in locations, community populations, and approaches.

Freshly graduated from college and having just finished an internship with an international anti-trafficking organization, AmeriCorps felt like a natural progression to explore my increasingly social gospel-oriented theology. With a newfound lens of understanding the Bible through the concept of God’s preferential option for the poor, and recognizing my lower middle class milieu and networks, I saw AmeriCorps as a concrete way to engage with lower-income communities through service and shared experiences in locality.

I approached the opportunity to work and live among refugee communities with an ardent and idealizing expectancy that relocation and proximity would lead to co-identification and solidarity. Though I cringe to write about it now (given my evolving theological and social analyses), back then, I thought I was partaking in “incarnational ministry” by moving to San Diego and living among recently resettled refugees.

I approached the opportunity to work and live among refugee communities with an ardent and idealizing expectancy that relocation and proximity would lead to co-identification and solidarity.

While I value my AmeriCorps year of experiential learning and intentional community as a formative and profound juncture in my development, today, I recognize multiple dynamics of privilege underlying my engagement and the paternalistic notion of incarnational ministry. I also acknowledge that the AmeriCorps experience benefitted me more than me helping refugees.

One of AmeriCorps’ core premises is for volunteers to share in the living conditions of their site communities, such as earning poverty-line living allowances, enrolling in food stamps for support, and learning to interact with government assistance systems. During my service year, I experienced this subsistence on my meager paycheck to paycheck income as not only a new stressful and vulnerable reality, but also as a connection point of solidarity with refugees as I trained them on financial literacy. However, I failed to see how their experiences of marginalization in the U.S. were about more than merely economic poverty; they were related to various other factors, such as race, gender, and religion.

I failed to see how their experiences of marginalization in the U.S. were about more than merely economic poverty; they were related to various other factors, such as race, gender, and religion.

Moreover, I was naïve to think that I could associate a year of chosen residence among San Diego’s diverse refugee enclaves as a point of shared experience. While I encountered some similar processes and living conditions, such as limited mobility due to transportation costs and not having access to health care, there were several key differences in the extent and consequential realities of our social locations.

For example, I had a driver’s license and a car, which saved me a lot of time in verifying my identity for public benefits and allowed me more mobility. And though I had stressful adjustments to make when I got into a car accident that year, which compounded my already stretched finances, I had my family as a safety net should I need to consider selling my car or borrowing money to fix it. Unlike many refugees, particularly newly arrived ones, I had a strong social network of family and friends that I could turn to in emergency situations.

Unlike many refugees, particularly newly arrived ones, I had a strong social network of family and friends that I could turn to in emergency situations.

My safety net of family was one of several privileges at play during my VISTA year. Other privileges I held in contrast to my refugee peers included a higher level of education, English as a native tongue, no dependents to care for, and an assumed power to help. My choice to participate in AmeriCorps reflected a capacity to willingly live a year earning poverty-line wages and an implicit belief that I could help fight against poverty through the program.

Acknowledging and reflecting on these privileges would have helped me to recognize my role as a guest in the community. I was a guest because despite having been born in southern California, the refugee communities in San Diego predated my existence to the 1970s when Vietnamese refugees resettled in the area, many of them at Camp Pendleton. I was also a guest because my short-term stay of a year was just a drop in the bucket of the longer history and future of the region and its residents. Though I was a guest, I did not see myself as a guest, and thus a savior complex mentality tacitly undergirded my work.

I attribute my tendency for a savior complex mentality largely to my upbringing in the Christian faith in the Western world. Though I attended mostly first-generation Korean immigrant churches with English speaking ministries until my college years, those churches propagated a whitewashed Christianity that exacerbated compliance with Western constructs of religiosity and norms. Personal salvation, evangelicalism, missionizing, and socially conservative ideals pervaded my religious spaces.

Through the forms of mission trips to Mexico or more distant countries in which pity and charity work commingled to characterize the “service” that my Korean American church group provided for impoverished locals, or of church leadership being limited to males only, the churches I grew up in imitated the imperialistic and triumphant actions and mindsets of the white church.

The churches I grew up in imitated the imperialistic and triumphant actions and mindsets of the white church.

Even as I underwent a social conscientization process during college, remnants of evangelical zeal permeated my intentions to be in relationship with people viewed by the mainstream as having marginalized identities and experiences. I was unable to reckon with the complexity of privileges and intersectionalities at work in my life; the decolonization process of my own mind and heart would take years.

As a second-generation Korean American woman from Los Angeles, I embody both oppression and privilege. My level of education, U.S. citizenship, lower middle class upbringing, and supportive family unit offer me access to resources and mobility, while my ethnicity, gender, and migration history continue to reverberate the subjections of white supremacy and neocolonialism.

Amidst my both-and realities, I consider it a spiritual practice to confront the complex, sometimes contradictory nature of privilege in my life. Acknowledging my capacity to be both marginalized and privileged helps me to continuously ask questions about the nature of power and privilege in both personal and public realms, and to reckon with the ways in which I comply with or resist those forces.

Acknowledging my capacity to be both marginalized and privileged helps me to continuously ask questions about the nature of power and privilege in both personal and public realms, and to reckon with the ways in which I comply with or resist those forces.

Ten years after my AmeriCorps VISTA year, I find myself entering as a guest in a reentry organization in Harlem, New York for my Clinical Pastoral Education (CPE) unit. CPE is a chaplaincy program that trains students and ministers to be spiritual caregivers for persons in crisis or transition.

Since AmeriCorps, my roles as an immigrant rights organizer in a predominantly Latinx context and a project manager for an anti-violence asset-based learning collaborative comprised of domestic violence survivors and advocates have placed me in contexts where I have learned to recognize existing strengths and power held by communities and individuals that are deemed marginalized and disempowered.

Through the generosity of community leaders and advocates who have shared their stories and allowed me to join in their movements, my mindset has shifted from the immediate impulse to help to a deeper sensitivity for social location and the importance of learning from others as well as myself.

In my interactions with formerly incarcerated individuals reentering public society thus far, I have been privy to profound reflections on the multitudinous transitions that entail reentry, and have witnessed struggling but notably surviving individuals empower one another through the sharing of their stories and insights.

These men and women bring to life the spirit and ethos of James Baldwin, who writes in “Nobody Knows My Name”: “The questions which one asks oneself begin, at last, to illuminate the world, and becomes one’s key to the experience of others. One can only face in others what one can face in oneself.”

“One can only face in others what one can face in oneself.”

I believe that many faith communities of the Christian tradition need to exercise this call for self-examination and confrontation as a means for connection with others. 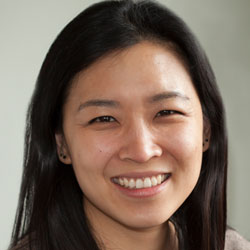 Kristine Chong (she/her/hers), a 2nd generation Korean American chaplain and activist, is the online editor for Inheritance. A former organizer, service provider, researcher, and community facilitator, Kristine’s ethos of spiritual care is rooted in the interconnectedness of spiritual and social change. Her praxis of care integrates ethics of liberationist, postcolonial, anticapitalist, and ecofeminist aims. She is a graduate of Union Theological Seminary (MDiv), University of Michigan (MPP), and UCLA (BA).