God in the Alleyways

Part of 5 of in
By Sarah Lam Akutagawa
Illustration by Nathalie Llemos
Jun 15, 2017 | min read
Part of 56: Generations
165 Snaps
165 0 Snaps
Oops! Something went wrong while submitting the form.

During the first planning meeting for InterVarsity’s Chinatown Program, I sat with two other Cantonese American women eating dumplings from small plastic bags. We were sitting in Portsmouth Square, a San Francisco Chinatown landmark filled with Chinese chess tournaments and slow-paced exercise classes. It was a fitting place to discuss the history and development of Chinese America.

When our leadership team met, we looked to answer the questions: How is the image of God reflected in the struggles and hopes of the Chinese American story? Where do we go to know His compassion for our community? In response, the meeting turned into hours of sharing stories about our parents and grandparents: the pain of their migration journeys, the food that spoke louder than words, and the patterns of resilience borne from generation to generation.

How is the image of God reflected in the struggles and hopes of the Chinese American story?

By the end, I felt like I was in church, and wondered why it felt so unfamiliar to experience this measure of sacred affection in the stories of my community. We decided to create a weeklong immersive experience that integrated faith, justice, and ethnic identity through the lens of the Chinatown narrative. I was fascinated by the idea that we could uncover untold stories, exposing a theology embodied in the streets and histories of people who looked like me.

For many Asian American Christians, spiritual and emotional brokenness stem from silence, shame, or cultural alienation. My own journey felt like a perpetual cycle of reflecting on voiceless years, embracing God’s restoration, and attempting to find a place to belong in a hyphenated identity.

The answers the church gave me often felt like trying to wear shoes on the wrong feet: their solutions were highly individualistic, lacked context, and intensified my sense of alienation. I have always hoped that God might speak to me in ways that felt true and full. My leadership of this summer program for Chinese American college students was inspired by this longing.

Their solutions were highly individualistic, lacked context, and intensified my sense of alienation.

Listening to our elders in poems of lament

That summer, we gathered 11 Chinese and Taiwanese American students and three Cantonese American staff for InterVarsity’s first Chinatown Program. We started at the former immigration detention center on Angel Island. Although over a million immigrants passed through Angel Island, its primary purpose was to enforce the Chinese Exclusion Act of 1882.

I had visited the island several times before to reflect on my family’s time there: both my grandfathers were among the 175,000 Chinese people who were detained and interrogated there from 1910-1940. Visiting this site was always emotional for me, and I often wondered whether God cared about the discriminatory treatment of Chinese immigrants, including my gung-gung and yeh-yeh.

I often wondered whether God cared about the discriminatory treatment of Chinese immigrants.

Crystal joined us for this day of the Chinatown Program. As a local InterVarsity area director who thought she didn’t have much of a personal connection to its history, she saw this trip as a learning opportunity. But as she walked the passageways of bunkbeds and mess halls, she saw poems etched into the wooden walls. For years, poems were carved by Angel Island detainees, frustrated and crying out for justice.

Out of curiosity, Crystal began to text her family, and she found out that both of her great-grandfathers had passed through the same building she was standing in over a century ago. “There was richness in my past that had been a mystery nobody talked about before,” she said. Where there was once vague understanding, there was now a tangible reality that not only placed her relatives in the arc of Chinese American immigration, but brought alive the hope and resilience in their journey. After the Chinatown Program, Crystal discovered long-lost immigration documents, recorded family interviews, and found relatives she had never known.

There was now a tangible reality that not only placed her relatives in the arc of Chinese American immigration, but brought alive the hope and resilience in their journey.

Despite the many times I had visited Angel Island before, this visit made me suddenly aware of the powerful intersection of suffering and family identity. And, as sobering as the island was, I sensed I belonged there and I felt grateful and joyfully whole. I believe that God heard the desperate poems etched on the wooden walls, and it changed the way I thought about suffering. Angel Island taught me to lament the lost stories of struggle and to honor the men and women who persisted in the face of injustice.

Understanding our parents in the gifts unspoken

Another aspect of Chinatown Program was our commitment to learn from the older people born and raised there. I invited my parents to join one of our evening panels; they helped us prepare dumplings while sharing their experiences.

It was fascinating to see my parents enter my ministry world, and open up to my students with honesty and humor. My mom talked about her identification with the Von Trapp children in “The Sound of Music” as her own mother made matching clothes for her family from a single fabric. My dad recalled how hard it was for his parents to raise five children in a foreign country.

Their stories helped me understand the weight of constantly translating for their parents, the alienation of not being “American” enough, and the burden of assimilation society put on them.

Their stories helped me understand the weight of constantly translating for their parents.

Listening to my parents, I remembered the dozens of times my mom would return from a business trip with a shopping bag from Gap or American Eagle and give it to me saying, “Here, I pulled this off the mannequin.” Growing up, I used to laugh at her — it was so concrete and impersonal. However, I teared up listening to my mom look back on her matching Von Trapp outfits. I realized what these moments meant to her: these were cherished gifts that represented a way to integrate, her healing hope for me.

A lot of memories like this have come back to me as I begin to unpack their sacrifices as the first Chinese American generation. I had never really seen my parents as people who bore the weight of immigration — they speak perfect English and my dad wears Birkenstocks every day.

Recently, though, I’m learning how their assimilation was painful and costly. And although reminders of their sacrifice were often a pretty persuasive method of control, God is graciously forming my relationship with my parents through their stories, and is producing a compassion and appreciation that was not there before.

I’m beginning to know my mom and dad in a new way and it is so powerful to incorporate their healing into my healing and their discipleship into my discipleship. This mending process was not one I could have done by journaling my thoughts or repeating a prayer — I needed my parents, and this moment helped me actually listen to them.

Remembering pain in our nation’s brokenness

The last day of Chinatown Program was at Cameron House. In 1874, Cameron House was committed to rescuing the most vulnerable Asian immigrants — girls trafficked into brothels and sold as slaves. Today, it continues to be a community center serving every part of Chinatown. My uncle grew up in Cameron House and the black-and-white photos of basketball games and group mugshots points to its place as a home away from home for many who grew up there.

To end our program, we hosted an incredible panel of representatives from Asians 4 Black Lives, Chinese for Affirmative Action, and ASPIRE, an API community group advocating for immigration reform. One by one, panelists spoke about issues of police brutality, immigration, and education reform.

I was overwhelmed with anger and sadness not because these realities were new, but precisely because they weren’t. Black men and women are forced daily to oppose the notion that their bodies and lives don’t matter. Insulting stereotypes of a “model minority” actually do harm to marginalized Asian Americans and reinforce educational inequality. Undocumented immigrants are incredibly vulnerable in a callous system that abuses their status.

With each jarring story and statistic, I kept tracing the patterns Chinese immigrants experienced to the injustices faced today in and outside the Chinese American community and it was absolutely reprehensible. These evils were persistent and near. Their stories pushed me to fully hear cries for peace. In some ways, the thing that had been passed down from my grandparents, to my parents, and then to me, was the contextual perspective and resilience to fight alongside — not just those who looked like me, but for every person made in the image of God.

I kept tracing the patterns Chinese immigrants experienced to the injustices faced today in and outside the Chinese American community.

The discipleship of a collective inheritance

When Chinatown Program ended, I was exhausted but deliriously happy. I’ve been on staff with InterVarsity for seven years. After all the large group talks, conferences, and campus outreaches, this program felt like the one moment that all of me mattered to God. He awakened me to deeper worship and greater joy because He was in the stories and places I assumed He had no relevance.

Where my family history felt removed from my discipleship, I found them bound together. Where I felt silenced by stereotypes and whitewashed institutions, He gave me words and authority.  The power I experienced in Chinatown Program was the power of an intergenerational, incarnational, context-oriented theology that revealed how deeply God cared for me and the Chinese American community. When God establishes Himself as the God of Abraham, Isaac, and Jacob, He is claiming to be present and purposeful both for each person and for the collective inheritance between the generations.

God is revealing a collective inheritance for Chinese Americans — one of lament and gratitude, history and prophecy, our elders and our children, and hopefully more sweet moments over dumplings. 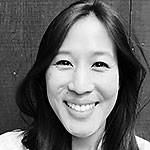 Sarah Lam Akutagawa is a third generation Cantonese American woman from San Francisco. She loves working with international students in InterVarsity. Her favorite things are Japanese washi tape, developing embodied and compassionate leaders, and her husband. She is wholly grateful to Carol Lee and Sarah Lee for their joint leadership of the 2016 Chinatown Program.