God Used Adoption to Save ... All of Us

What have I done? I quietly asked myself this countless times the first year with our adopted child. Bonding was a challenge.

When he desperately reached out to a strange man in the airport and I felt repeatedly rejected in this manner, I wondered, “What have I done?”

While grocery store shoppers threw me dirty looks as our adopted child screeched like fingernails on a chalkboard, because that’s how he got what he wanted at the orphanage, I thought, “What have I done?”

Of course, we had decided to adopt after prayer and thoughtful consideration. We knew this was the right choice for us. But our first year was certainly not easy. And being Luke’s primary caregiver all day, it felt like the burden fell wholly on me.

I felt like a bad mom to my 6-year-old biological son because so much of my attention was on my newly adopted 1-year-old. My inability to return to the relative peace we once knew left me constantly tired with a sense of hopelessness. And I’m an optimist.

We knew adoption might be challenging. But no amount of warning equaled the reality that slapped me in the face. Yet, admitting my struggles felt like defeat, so I unwittingly suffered in silence as I asked God if we had misread His intentions for us.

No amount of warning equaled the reality that slapped me in the face.

The only thing moving me forward was the reminder of how God brought us to our adopted son. Our story was my beacon of truth: Adopting Luke was absolutely what we were called to do.

Even before we held Luke in our arms, he saved us.

During the pre-adoption process, we discovered that I had a potentially life-threatening illness that would have gone undetected because the test that would have revealed the disease isn’t routinely done until about age 60, which would have been too late. Our adopted-one-to-be saved my life, although at the time we had no idea if we would still be able to adopt.

As we worked through all the decisions regarding my sickness and whether or not to move forward with the adoption, fear crept in. All the what-ifs began piling up. We asked questions like: Would we or our extended family love and support our adopted child as much as his biological brother and cousins? What physical and emotional “baggage” do adopted children come with? These questions and more are still asked of me today by prospective adoptive parents.

Would we or our extended family love and support our adopted child as much as his biological brother and cousins?

Whether adopted or biological, children are unpredictable. And so are those who love them. Some biological siblings don't get along; some friendships are stronger than blood. Perfectly healthy children get serious illnesses; sick kids become stronger than some typical children. And as our family struggles, we take it a day at a time, tackling each challenge as it comes.

Allowing God into our fears helped us to see that it wasn’t simply about our comfort or our ideas about making a family. It was about living out God’s truths, loving beyond ourselves, and extending reconciliation in a practical way. For us, that meant adoption.

Our journey started off hopeful but quickly took several unexpected dips. We received hurtful backlash from extended family members who did not agree with adoption. We even thought about our willingness to end relationships with those who could not accept our adopted child into the family. We prayed all the more, asking God to give us wisdom about how to respond lovingly.

Various reasons to not adopt were thrown at us. “They’ll leave you to go to their [biological] family.” Or, “I heard of an adopted child who killed their parents.” It took God’s peace to know we were doing the right thing. Thankfully, immediately after we brought our child home, the naysayers became quite fond of our new addition and extended to him the rightful attention given to any new member of the family. We could not have predicted this reaction.

Finally, my required medical exam revealed an autoimmune disease that would not only postpone the adoption process, but threatened to demolish our desire to adopt altogether. Only healthy adults were allowed to adopt, understandably, for the sake of the child. I became frustrated; if this was our calling, why was it so hard?

If this was our calling, why was it so hard?

After seven months of testing and trying varying prescriptions that would not only prolong my life but save it, we were given the OK to proceed with adoption. I was expected to live long enough to watch my children enter adulthood.

During our pause from adoption papers and social workers, not only were we worried about my health, but we wrestled with two conflicting decisions. Did God call us to adopt just so I could catch and stop this disease in its tracks, but not follow through with the adoption? Or were we still supposed to adopt a child and bring him or her into this unknown future with a mom whose health could start going downhill anytime, if the medication stopped working? These questions kept us on our knees in prayer, asking for the next right steps.

Did God call us to adopt just so I could catch and stop this disease in its tracks, but not follow through with the adoption?

My husband started to shy away from the idea of adoption. He was trying to help us be at peace with being a family of three. To me, this felt like the loss of our dream family of four. Still, as the possibility of “just three” tearfully sank in, I learned to be content, appreciating anew the child we already had.

After about a month of further prayer, listening to wise counsel, and through our reading of Scripture, we equally sensed God’s pleasure with adoption and a resounding “yes” for us to move forward.

In the process of adopting Luke, my U.S. citizenship was made official (another scary bump that was fixed on our road to adoption), our extended family grew to embrace more than blood, and my “silent” disease was found, which gave me the gift of “time” to not only appreciate the son we already had, but eagerly look forward to the one to come.

It wasn’t long after we restarted the process that we were faced with yet another decision about our family. There was an adorable boy waiting to be adopted, aging in the system due to an undesirable family medical history. Even though the child was a typical child, it was possible that his condition might change in the future. Caring for a special needs child was a task beyond my ability. Prayer was again necessary to clear our minds of our wants and fears, and to focus on what was to be our future.

God brought clarity on the last night to make a decision. My husband and I decided to discuss our thoughts after we took time on our own to fast, pray, and read Scripture for confirmation of our next steps. We were relieved to come to the same solid conclusion. Adoption was a good choice for us.

Just like this little boy’s medical future, my own medical condition moving forward was a mystery. We didn’t know what was ahead, but we felt assured that God had our backs. And with His Holy Spirit’s help, we would take this journey one situation at a time, embraced by grace and other undeserved bonuses along the way. In unexpected ways, God answered our cries.

We didn’t know what was ahead, but we felt assured that God had our backs.

Our story takes place between the hopes for a happy home and the struggles that got us there. The initial process was a glimpse into and a preparation for what would lie ahead. Yes, even good things are hard. They take twists and turns away from and around our best plans. This taught us to rely on God and hold loosely to what we believe is the better way. We are being refined and healed continually by this process.

Nearly 10 years after bringing Luke home, he was baptized because, in his words, “I want this and I’m ready.”

He’s the source of a lot of joy and a lot of challenges — just like any child — biological or adopted. And his adoption is a reminder of God’s mercy, like catching a potential deadly disease early. It’s also a reminder of countless biblical truths, especially our adoption into the family of God.

Surprises still lie ahead. We expect them and are confident we will get help as they come. But for us, adoption has molded us, healed us, and is continually making us whole each and every day. 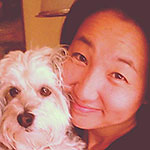 Ann Suk Wang is a weaver of stories, as a journalist and fiction writer for middle graders. Her passions include dogs, doughnuts, and dancing (like hip hop and hula -hurrah!). She graduated from UCLA (BA) and Boston University (MS) with degrees in Mass Communication. Her three boys (including the one she's married to) and hairy canine daughter, Bree, keep her life in Los Angeles interesting.