Healing the Scars That Remain

If you met her, you would see a sweet, kind, gentle young woman who is quick to look to God for help. You wouldn’t see the pain she has carried for years from parental abuse or the decades spent trusting that God could change her family.

MY DAD WASN'T ALWAYS that abusive. Until I was 9, he was relatively nice to us.

My mom remembers a time when our family went to SeaWorld, when my dad took my baby brother in his arms and stood in the shade to protect him from the sun and heat during the show.

I'm not saying he was a saint. He periodically took his frustrations and anger out on my mom, yelling at her and blaming her for things beyond her control. I only saw him slap my mom in the face twice in my life, but he would often put her down verbally.

The emotional abuse caused by his anger was present throughout our lives, but the physical abuse began when my brother was about 8 years old.

The first time I saw it was when my brother brought home his report card, showing some B grades. My dad yelled at him and beat him. In my dad's mind, this was motivation for my brother to do better, but in reality it crushed his spirit and traumatized him. My brother hadn't done anything morally wrong. All that he did was get some "good" grades, instead of only "excellent" grades. My brother was a good kid: sweet, obedient, and didn't cause trouble. He didn't deserve rebuke, and especially did not deserve abuse.

In my dad's mind, this was motivation for my brother to do better, but in reality it crushed his spirit and traumatized him.

Disappointing my dad in any way could lead to a beating. Once, he was disappointed because my brother got beaten up by a bully. Another time, it was because he spilled water.

The abuse continued through high school. When my brother, who was in Advanced Placement and honors classes, brought home more B grades, my dad yelled at him and hit him. He destroyed any of my brother's belongings that he thought were responsible for my brother "not doing well" in school, like his computer game discs.

As my brother grew older, my dad started using more painful things to hit him. When my brother was in his teenage years, Dad generally used a big plastic bat. Once, he used the wooden part of a BB gun. Thankfully, my dad only hit him on the butt, rather than hitting vital areas like my brother's head or other parts of his body that could have been permanently damaged.

When my dad would start to hit my brother, my mom and I would beg him to stop. He would just yell at us to go away. When we continued to beg, he would yell again and threaten to beat my brother harder if we didn't go away. Tearfully, my mom and I would retreat to our own rooms. I continued to cry in my room while I listened to the sound of my brother being beaten, which would last as long as it took for my dad to feel satisfied.

When we continued to beg, he would yell again and threaten to beat my brother harder if we didn't go away.

I would feverishly pray to God, asking God to stop the beating, to stop this from happening again, to just — stop it! Eventually it would stop. But there was no peace, because we all knew it would happen again and again.

Why didn't I physically intervene? It was mostly because my dad scared me, but also because I was torn between protecting my brother and respecting my dad. I would beg him to stop, but unfortunately, that's usually as far as I got. In retrospect, I should have clung to my brother and not let go. My dad probably wouldn't have hit me, since he didn't believe in beating girls.

Now that I'm an adult, I know God wants us to "Defend the weak and the fatherless; uphold the cause of the poor and the oppressed" (Psalm 82:3 NIV). When I was young, even though I knew in my heart what I needed to do, I was too scared to do it.

Once I went beyond just begging my dad to stop. I was in my senior year of high school. As my dad was about to hit my brother again, I stepped in between them. He yelled at me to get out of the way. I'm not sure how long I stood there, pleading with him to not hit my brother. The next thing I remember is my dad getting a ruler and hitting my hands several times to reprimand me.

That one time, I think he walked away without hitting my brother.

I never felt safe at home. There was no telling when or why my dad would explode. I always felt on edge and scared, at least on a subconscious level. I was afraid of him being angry at my brother or for some other reason. However, even I wasn't exempt from his anger, only his violence. He also yelled at me.

I never felt safe at home. There was no telling when or why my dad would explode.

I kept praying because I hoped God would answer one day. My dad was not Christian, but my mom was. She had taken me and my brother to church since we were young.

Having such a volatile, angry dad definitely scarred and shaped us in unhealthy ways, especially my brother. I was fearful all the time and jumpy. I couldn't stand up for myself against female bullies or my college boyfriend, who treated me as no Christian man should. My brother was also very fearful and didn't know how to stand up for himself. It didn't surface immediately, but he became very angry in his 20s.

Having such a volatile, angry dad definitely scarred and shaped us in unhealthy ways, especially my brother. I was fearful all the time and jumpy.

I'm now in my 30s. It has taken years for us to very slowly and gradually heal, and for our thought processes, worldviews, and self-perception to recover from the harm caused by his anger. We are still healing.

During that time, my dad had a chance to reflect upon his actions and ponder why we had cut him out of our lives. Through a mutual friend of my parents, my dad heard stories about the incredible anger issues and trauma that were finally surfacing in my brother, and how that was affecting me and my mom. My mom also arranged to meet with him for the sole purpose of telling him how his abuse had scarred my brother, and how my brother needed to hear my dad apologize in order to heal.

After several years, my dad gave Christmas cards to my grandmother for me and my brother. In the cards, he wrote apologies to each of us. He was sorry for what he had done and confessed that it was wrong. I cried when I read it, because never in his life had he ever apologized to us or admitted that anything he did was wrong. That's when I knew he had changed and let him back into my life. My brother waited another couple of years because he didn't trust that our dad had truly changed, not at first.

I cried when I read it, because never in his life had he ever apologized to us or admitted that anything he did was wrong.

My dad is not the man he used to be: He's the complete opposite. He's calm, patient, reasonable, and even loving now. Since we've let him back into our lives, he has been a pretty good dad. He hasn't had any angry outbursts. My brother and I have a decent relationship with him now, and we see him for all the major holidays, our birthdays, and sometimes just because.

Throughout all of the abuse, I never gave up hope that God would change my circumstances and my dad, and He did. However, my dad still isn't a Christian — he has his own religious beliefs that don't fall in line with any major religion. I pray that he will one day know Christ. 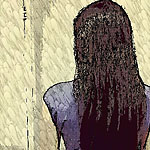 Arwen U. is a Korean American who grew up in southern California, studied English literature, and likes dogs.