How Do I Introduce Myself?

In 7th grade my geography teacher — in the name of celebrating our respective heritages — split us up into cultural groups and had us research our personal and group ancestries. From here we were asked to work together to present what would be a beautiful tapestry of nationalities and people groups.

As a young person identifying as Hapahaole, a Hawaiian pidgin term used across the islands and more recently spread to encompass a wide variety of mixed-Asian/Pacific Islander identities, it was both heart-breaking and perplexing to find myself standing among a group of Polish classmates, teaching a history of a national people that I could barely trace and only found semblance of four maternal generations ago. Heart-breaking, perplexing, and yet patterned.

Like many people with multiracial identity I have spent the greater part of my life struggling with all sorts of questions around identity. What does it mean to be “from” somewhere? Am I Kanaka Maoli? Am I Japanese or Nikkei? Am I white? What metric governs my ability to identify with my respective heritages? What is the relationship between my race, my ethnicity, and my culture especially when I don’t share just one with either or my parents?

Most ostensibly, how do I name my experience in a world that has in both invisible and visible ways attempted to erase me and people like me?

How do I name my experience in a world that has in both invisible and visible ways attempted to erase me and people like me?

On the structural level, we’ve seen the armed overthrow and later illegal annexing of the Hawaiian monarchy as well as years of Japanese racism and incarceration. On an interpersonal level, there have always been infractions like having well-intentioned Sunday school classmates on the day of Pearl Harbor Remembrance respond to my prayer request of family cohesion with things like, “You need to remember it was the Japanese who attacked us”, and that “Hawaii’s economy depends solely on U.S. military presence and tourism; they need us.”

When people who love you don’t have a framework for where you have come from, it’s challenging to develop that for yourself. And while resources are continuing to grow for those navigating multiracial identity, it still doesn’t account for the ways in which I have and will continue to spend much of my energy learning who I am, while also having to defend my right to identify with my multiple backgrounds in general.

While lending itself to numerous tensions, I’ve nevertheless come to embrace this experience as one that seems to have formed distinct and liberative responses faith communities can have to their Micah 6:8 calling of “doing justice”.

Further, for my own faith community, it has also provided a helpful perspective to broader questions around what a general witness for the Christian gospel can look like — in a time and nation, largely due to the Evangelical political climate — when more and more people are finding it challenging to associate themselves with the faith and label they once found a home in.

More and more people are finding it challenging to associate themselves with the faith and label they once found a home in.

For most of my life, my frustrating experience around race and ethnicity was compounded by wrestling through gender and sexual identity as well.

Whether in Evangelical communities that wanted to thrust certain labels and assumptions on me that weren’t true about my orientation, or among the community I was cultivating with other AAPI or white friends and family outside of the faith around race, I’ve been largely regarded as unquestionably straight when it came to sexual identity and as a something versus a someone; “half” of this, a “quarter” of that, “part”, “mixed”, and a whole host of other phrases that promote dismembering ethos when it has come to race.

Between the erasure and dismembering language that of these experiences, it ultimately created a sense that I was not “enough” of anything to qualify for full identity with any family of people. I have been told by countless friends that I’m not “really” Hawaiian, not “really” Japanese, and that I’m “mostly” white. I’ve been told that “no one is actually gay” that “something must have happened to me” to make me this way. I’ve had partners describe to me how I couldn’t be Asian because otherwise they “wouldn’t be attracted to me”. I have been turned away from minority leadership councils within several education institutions because “read as white is essentially white”. My ambiguous “otherness” has caused racial isolation, and my proximity to whiteness has caused compounded invisibility. Years of these words, experiences, and sentiments have never ceased to sting, to resound in my mind, and to coalesce into one primary feeling: I don’t belong.

My ambiguous “otherness” has caused racial isolation, and my proximity to whiteness has caused compounded invisibility.

I have learned that survival, for many generations of my family physically and for me socially, was and is often contingent on being willing to assimilate, to diminish the qualities, characteristics, or ways of being in the world that are perceived as different. If who I am is not a part of available narrative of the given community, then my options are to pretend to not be those things or to run the risk of being ostracized.

As I went through high school and college, whether with my peers, working with youth, volunteering with parachurch organizations, or committing myself to various ministries at my church or university, I almost always felt suspended between my multiple races, multiple heritages, multiple cultures, histories of both oppressive and oppressed peoples, and caught between the culture wars of Christianity and human sexuality.

While grateful for the people who demonstrated a generally coherent and winsome expression of what a living and resurrected Christ could look like, there were few and far moments I can point to that suggested that my specific Christian identity had a place given that it wasn’t more ethnically homogenous, more heterosexual, and more cisgender. While I always deeply believed that the historical Jesus had room to let all the ways I was made belong, the message I inherited from the Church and from other available communities was that I could only fit if I wasn’t too much other: too brown, too queer, too androgynous, causing too much complication to the majority categories for race, gender, and sexuality.

While I always deeply believed that the historical Jesus had room to let all the ways I was made belong, the message I inherited from the Church and from other available communities was that I could only fit if I wasn’t too much other.

I began to understand myself as an Outside Insider; in this case, a person truly fastened to the core message of the Christian faith and practice (Insider) but perpetually hearing myself and people like me discussed in those settings as if we, as if I, weren’t there (Outsider.)

I know that this experience is not unique. In fact, according to the most recent Barna Group poll results, our country has fewer people attending church every week than ever before, and this is largely because of the way many find it impossible to identify with the Church’s resistance to engaging with social politics (race, sexuality, gender) in what they perceive as a meaningful and honoring way.

While disparaging and even dehumanizing, I feel confident that for me this has ultimately catalyzed a sensitivity to those others who for a variety of reasons also experience what it means to go unseen. It has ignited a passion around finding an expression of the faith that doesn’t present as the white-centering, affluent, able-bodied Evangelicalism that leads to identity negation, self-reproach, and mere platitudes around the fractured quality of life.

This has ultimately catalyzed a sensitivity to those others who for a variety of reasons also experience what it means to go unseen.

It’s become a sensitivity and a passion that while propelling me to action, nevertheless finds it critical to pursue the work of visibility and advocacy in the context of relationship, specifically relationship with those whom I disagree with.

To live into the tradition of Jesus in a day and age of rampant (albeit warranted) skepticism, where competing and sometimes more emotionally tenable ideologies abound, I must start understanding the work of God in my life not despite my background but because of my background.

I am Christian. I am Hawaiian. I am Japanese. I am Scandinavian. I am Irish. I am German. I am queer. I am Hapa and I am whole. 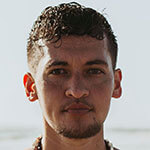 Myles Markham (he/him or they/them) is a graduate of Columbia Theological Seminary, the Impact Producer at Multitude Films, an LGBTQ women-led independent documentary company and the Screening Manager for Story Productions, a non-fiction film ministry of Presbyterian Disaster Assistance. Previous to their work in film, Myles served as a faith organizer and consultant on LGBTQ inclusion and racial justice in evangelical and conservative communities for five years.