Part of 3 of in
By Jessica Gapasin Dennis
Photography by Hannah Villanueva
Dec 17, 2021 | 6 min read
Part of 74: All's Well That Ends Well?
22 Snaps
22 0 Snaps
Oops! Something went wrong while submitting the form.

I come from a family of artists — of creators and musicians and dancers and singers. You wouldn’t know it, though, since the major arc of my family history — at least, the narrative that I’m most familiar with — has always been about survival and stability.

My grandmother on my father’s side is from Cagayan, a province on the northern tip of the northern-most Philippine island of Luzon. When the Japanese invaded the Philippines in 1941, it was by way of Cagayan. My grandmother was 15 years old at the time, and when they heard news of the Japanese invading the country and raping their women, her oldest brother kept his sisters safe by hiding them on a boat, leaving their home behind, and following the boat along the Cagayan River to a relative’s home.

On the opposite end of the Philippines is my mother’s home, a remote village in Mindanao, the southern-most island of the Philippines, an area with a long history of Muslim-Christian conflict and violence. At the height of the Moro conflict in Mindanao in 1974, my mom recalls being a college student in Manila, afraid to go to class after hearing reports of snipers climbing coconut trees near the school and shooting at the laboratory on the third floor.

Each of my parents grew up in rural areas with 11 brothers and sisters and had parents who owned small businesses that buoyed their families above hunger and poverty. I come from a family of survivors, of hustlers and scrappy entrepreneurs who eventually sent almost all of their kids to college, many of whom went on to pursue professional careers in nursing, accounting, and teaching.

Is it still survivor’s guilt if I wasn’t the one who survived? If my story wasn’t written until several chapters later? Because there are times when this legacy, the gravity of their hardship, weighs down on me like a lead weight around my neck, the ghosts of my dead ancestors haunting me with the stories of their sacrifice and suffering.

What is the proper response to the sacrifice of all those who came before me? Who decides when it is enough?

There’s a Filipino phrase that I came across later in life during my studies in graduate school, but it was a concept that I recognized immediately: the Filipino cultural value of utang ng loob:

literally, “inner debt” in the sense of “debt of self”, or better still, a deep or practically unrepayable “debt of gratitude.” …this custom is perhaps the strongest agent of vertical integration in society, outside of kinship ties. Whoever fails to honor his “utang ng loob” is considered a social outcast or “walang hiya” (without shame, honor or credibility, public “loss of face”), which is the worst opprobrium possible in Philippine society.(1)

The indebtedness that you feel toward someone who has given something that you cannot repay — it’s been embedded so deeply within me that it colors my entire worldview. It probably shouldn’t come as a surprise that this debt of gratitude has figured so prominently in my spirituality. When my parents became active in the Catholic Charismatic Movement in the early 1990s, it was the first time that I’d heard the story of Jesus and his death on the cross in a way that made me acutely feel personally responsible for his suffering.

You see, Jesus’ punishment was supposed to be my punishment.

Those were my sins that nailed him to the cross.

The whips that tore at his back, the crown of thorns that pierced his skin — all of it happened because of my disobedience.

Jesus’ suffering was because of me, it was for me. It was my fault.

And upon hearing that, all my tender-hearted, guilt- and shame-driven 13-year old self could do was to try to figure out what I could do to respond with my whole self in gratitude.

What is the proper response to the sacrifice of the Christ, the Son of God? When is it enough?

There’s a song that I learned how to play on the piano around that time called “My Tribute” by Andraé Crouch, and its lyrics perfectly sum up the indebtedness that I felt:‍

How can I say thanks / For the things You have done for me?
Things so undeserved / Yet You gave to prove Your love for me
The voices of a million angels / Could not express my gratitude
All that I am and ever hope to be / I owe it all to Thee‍

Back then, my sense of okayness, that feeling that I’m okay, that everyone’s okay — it was tied so closely to my parent’s approval that when God came into the picture, God’s approval layered very neatly over my parent’s approval. So neatly, in fact, that it was hard for me to distinguish between the two.

I look back on the decades that span the chasm between my former self and the woman who I’ve become. I see all the care and effort I poured into doing the right thing, into making good choices and following the rules and giving all the right answers. I strived to be the best, to be generous and kind and obedient, sensitive to whatever was expected of me, mindful of making my family proud, of making an offering that was pleasing to God.

I look back and I ache for her.

Not for time wasted. Because I still believe that nothing is ever wasted. I ache for all the pressure she claimed as her own: to be perfect, to be good enough, to be worthy of the sacrifices that preceded her yet unrealized life.

In the book of Leviticus, the writers speak of the year of Jubilee, a time when the Israelites were to “proclaim liberty in the land for all its inhabitants,” when slaves were set free, when you were released from your debts, when land was returned to their rightful owners (Lev 25:1-13). It’s unclear if this was ever practiced or if it was a dream that never came to fruition.

I would like to think that this dream of Jubilee could be realized in our own lifetimes. That we no longer see the sufferings of the past as a debt to be repaid. That we are set free from the transactional understanding of the life, death, and resurrection of Jesus, the Christ. That we can fully come home to ourselves, immersed in the knowledge that the life that we have been given is a gift with no strings attached.

As I grow older, I’ve come to recognize that this burden that I carry is not the legacy given to me by my forebears. Their legacy is not a debt to be paid or a weight to be crushed under. The whole of it cannot be summed up as a thing that I can hold. Their legacy is a light that burns within me, a fire that cannot be extinguished because there are still stories to tell, invisible threads that have yet to be woven into the tapestry of the world.

Because the truth is, that even in the midst of sacrifice and struggle, my family also has a legacy of creating beautiful things.

My grandfather on my mother’s side was a Master Cutter for a tailor in Cebu where he designed men’s suits.

My grandfather on my dad’s side, despite not knowing English, was handpicked to build the cabinets on Ed McMahon’s yacht because he was known for his craftsmanship.

My mom was cast as the lead for her high school play — apparently around the same time my dad won a singing contest on a local radio show.

My father and his father were both renowned green thumbs. They gardened and farmed, nourishing and cultivating plants and crops back to life.

In my generation, there are writers and graphic designers, a tattoo artist and musicians. My sister was an opera singer. I once played piano for a performance at the Italian Embassy.

We are teachers and stay-at-home parents, bank tellers and HR specialists. We are unemployed and in the midst of figuring things out, hospital workers and restaurant servers, undoing and breaking and healing from generational cycles of trauma.

We are speaking words of life and hope into our children and into the world around us. Loving and forgiving ourselves and others, learning how to do it without any caveats or conditions. The list goes on and on, a legacy of beauty, of new creation, of life.

What then, is the proper response to this gift of life that we have been given? By our ancestors, by this God who has pitched his tent among us?

The answer, I’ve come to find out, is to live.

And that is — and has always been — enough. 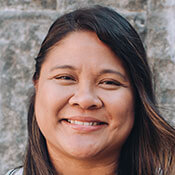 Jessica Gapasin Dennis (she/her) is a music-/book-/movie-loving California girl living in the Washington, D.C. metro area with her husband and their two girls, ages 6 and 9, and their newest addition, a rambunctious Husky-Terrier puppy. She writes from the perspective of a second-generation Filipina-American and holds an M.A. in pastoral studies from the Washington Theological Union with background theology coursework from the Franciscan University of Steubenville. There are many things she used to believe strongly that she no longer holds true, and has come to realize that changingour minds and changes of hearts are all simply part of being human — and it is a scary and beautiful thing. Find her on IG @leavenintheworld 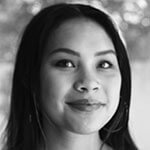 Raised in Alaska, Hannah Villanueva is a writer and photographer who is currently residing on Duwamish territory known as present day Seattle. She is a storyteller and visionary who is on a journey of instilling empathy and emotion. As a multiracial, Filipina and Latinx woman, she hopes to portray wholeness in her art. Her work can be found on Instagram @vianueva.