Me, Myself, and My Pencils

Part of 6 of in
By Adaobi Ugoagu with Grace Ding
Illustrations by Grace Ding
Apr 01, 2016 | min read
Part of 42: Hands On
0 Snaps
0 0 Snaps
Oops! Something went wrong while submitting the form.

GRACE SAT AT HER DESK with a clean sheet of paper, the blank sheet beckoning her to begin the process of creating. Placed to the right of the paper were five colored pencils — all the materials she would use for this session. Her eyes briefly scanned over those five colors, and various images flickered through her mind as she decided on which color would be the best foundation for the piece. After taking a moment to center herself, she self-assuredly picked up the color Christian, knowing that this would set the appropriate tone for the picture.

As she sketched and stroked away, the rich color reminded her of the time she drew a comic about a friend's depression. She remembered how the animated visuals came alive in her head and the urgency to make those illustrations a reality. Upon publicly sharing that comic, the reception from her friends was positive as many were touched by the visual story. It had been a warm and affirming sensation — using her talent to shed light on someone's story and ultimately, the gospel.

She then picked up the color Woman to shade within her lines. The image took on more dimension as she blended, and the two colors complemented each other gracefully as a whole. This new color was vibrant in nature. She never once questioned her Creator's hand in shaping her femininity — in fact, it was a source of strength for her as she pursued art as a personal passion. Through her hand, womanhood was a particular tone through which she was able to add a unique and resonant perspective to her artwork. It was a source of pride that  enabled her to distinguish herself as a person and as an artist.

She never once questioned her Creator’s hand in shaping her femininity — in fact, it was a source of strength for her as she pursued art as a personal passion.

Her hand hesitantly reached for Daughter, and her parents came to mind. Their voices began to echo emphatically in her head. It was as if they were sitting next to her. The tip of the colored pencil hovered over her paper, unsure about where it should go. She didn't want to make a mistake, because going back to fix it was arduous work. Her father recognized Grace's gift, and upon going into university, gave her suggestions of majors that would allow her to stay creative, but also grant her a stable income when she graduated. Her mother was clear-cut about her preferences for Grace: medicine, just as her sister chose.

She reluctantly began to shade with the color. Daughter wasn't as smooth and free-flowing as the first two colors; its color gave the image a gritty shadowed effect, and the stroke was shorter, timid, and inconsistent. Her father had once been an artist, too. He loved to draw and paint, but debated on whether to pursue it full time. In the end, he chose industrial engineering over art for the sake of his family. His past mirrored her present dilemma, an inheritance she lamented in reconciling an identity that conflicted with a gift.

The picture needed more Chinese to express that predicament, its place at the innermost parts of the image. It was an act of love that her parents urged their children to become engineers, doctors, lawyers, and even architects. In comparison to those jobs, being an artist seemed self-indulgent. She physically cringed, unsatisfied at the way Chinese was appearing on paper and wishing that its tint was more forgiving.

She physically cringed, unsatisfied at the way Chinese was appearing on paper and wishing that its tint was more forgiving.

She let out a deep sigh and stopped coloring for a moment to massage her cramping hand. As she worked out the muscles in her thumb, she realized something about the color Chinese. If she stared at it for too long, the color appeared dull in comparison to the robust colors that she used previously. However, when the image was looked at holistically, Chinese intensified the other colors' strengths. She lingered on the image for a moment, feeling out how the affirmation felt on her ethnic identity. Chinese might not have been as vibrant in hue as Daughter, Woman, and Christian, but it was necessary to the image.

She lingered on the image for a moment, feeling out how the affirmation felt on her ethnic identity.

Her work was slowly coming together, the colors interplaying with their unique purposes for this masterpiece. She could finally breathe with more ease. She sat upright and stared out of her room window, marveling at God's work. The birds flying over her neighborhood trees. The vast, pure blueness of the sky.

She picked up the last color, Artist, and started to highlight around the image. The highlights were specifically for the places where light touched, giving the visual a three-dimensional feel. She continued to look in her mind for where the light would hit, and then proceeded to highlight those areas. She lifted the paper up again and scanned it as a whole. It was clear: Artist had just as much of a place in the picture as the other colors. Why let one color exclude another — Daughter denying Artist, Chinese overshadowing Christian — when blending was possible, even delightful?

It was nowhere near done, actually. She was determined to figure out how to make the colors coexist even more harmoniously, revisiting each of the colors one by one, layering and polishing. She placed her paper down on the desk, twirling the Artist pencil in between her fingers, and tugging testily at a strand of her hair. This was turning out to be more of an emotional roller coaster than a relaxing drawing session. She slumped over her desk, paralyzed at everything that was before her and unsure of how she was to do all of this alone.

Creating the universe must have been even more of a quandary than what she was dealing with, yet God is still interacting with all of His creation. If she was truly her Father's daughter, the few colors He gave her were not only on purpose, but invited innovation. This hope didn't extinguish the concerns that continued to swim around in her mind; rather, it propelled her to keep pushing through.

So she picked up her pencil again. 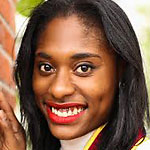 Adaobi Ugoagu is a Los Angeles-based fashion blogger who has a deep passion for design, social justice, and Jesus. Her eclectic writing background includes: producing an ethnography on the institutionalization of the American Church, and publishing content for the beauty and entertainment aggregator BeautyCon. She is a recent graduate of the University of Southern California.