Part of 6 of in
by Sarah D. Park with Jaz Jamora
PHOTOGRAPHY BY ALISA WONG
Jul 01, 2016 | min read
Part of 45: Imago Dei
0 Snaps
0 0 Snaps
Oops! Something went wrong while submitting the form.

JAZ AND MELODY ARE TWINS; they're fraternal and living out their separate stories. Then 12 years ago, Melody's body began to fail. She was diagnosed with multiple sclerosis, and the twins' stories changed. Melody became the twin who needed caring for. Jaz became the twin who was blessed with a "normal" body.

The storyline becomes more predictable. Family members accepted their new reality. Adjustments were made. And Jaz learned how to take care of her sister.

It's not surprising. It's what family does.

At 5:00 p.m., Jaz ends work as a court services assistant at the local courthouse, and essentially, her second shift begins. She relieves the caregiver who takes care of Melody. At 32, they still live with their parents, while their younger sisters, ages 27 and 30, have moved out. Their parents, who both work full-time, are secondary caregivers — they transport her into vehicles and provide for Melody financially. But for one reason or another, Jaz implicitly accepts responsibility over Melody. She offers few complaints and is very matter-of-fact.

But for one reason or another, Jaz implicitly accepts responsibility over Melody.

When I ask why her and not her parents, she says simply, "I'm her twin."

When I ask her if she ever feels too exhausted for it — "Of course."

"Caregiver burnout," she calls it. "I experience it all the time. I felt it a couple of months ago, when I first started my job."

Melody was diagnosed in 2004, when she was just 21. MS is an unpredictable disease of the central nervous system that disrupts the flow of information within the brain, and between the brain and body. She had described feeling like something was wrong, but no one could figure out what it was. Her primary care physician referred her to a neurologist, and a spinal tap revealed that she had MS. Jaz was not there for the diagnosis, so even as she describes this life-altering event, she needs Melody to fill in the blanks.

The first significant symptom that comes to Jaz's memory is one from five years ago, at their younger sister's wedding. Melody tripped while holding onto Jaz, as she often did before she lost the use of her legs altogether. Melody fell and brought Jaz down with her.

It's an ominous picture. I wonder if this would be a metaphor for their whole lives —  this diagnosis crippling not just one body, but two — and if Jaz would ever find a life that is truly just her own.

If there's one thing about Jaz that stands out to me, it's just that — her desire to have her own story. Jaz emphasizes the parts of her life that are her own. She lingers on her job, takes pride in being the first in her family with a bachelor's degree, and lights up when she talks about her hopes for marriage.

If there's one thing about Jaz that stands out to me, it's her desire to have her own story

Yet even as Jaz hopes to come into her own, it's obvious that Melody's journey is Jaz's as well, dictating where her money goes, what her future spouse will have to be OK with, where she lives, and how she spends her spare time. And these choices are not "as a matter of course".

The kind of love Jaz embodies is powerful. While her situation seems extreme, it is not surprising, especially to Asian Americans. As adults, children are often expected to make money and gain positions that would benefit and invest in the family.

And perhaps because it is also familiar, we are blind to it. We may not choose when misfortune strikes but we're called upon to take care of people who would do the same for us. But it is in these times we witness the power — and choice — of family. When things are stripped away from you, the choices to make are more clear and palpable — there are less things to hide behind. Jaz, under no compulsion, calls herself her sister's keeper.

What are the things done here on Earth that store up treasures in heaven, which can never be stolen or destroyed?

What are the things done here on Earth that store up treasures in heaven, which can never be stolen or destroyed?

When I first spoke with Jaz about having a twin with MS, her answers to my questions were so simple in light of a complicated situation. There were no grand revelations or insights, because it is normal to her. Disability means you get to experience life in an entirely unique way. She simply has different kinds of choices to make. Maybe she doesn't have to think too hard, they're just done.

"My sister's keeper" is the kind of title that can't be expected of someone. It can't be bestowed. One chooses it for oneself.

"My sister's keeper" is the kind of title that can't be expected of someone. One chooses it for oneself.

The part of Jaz's story that surprised me the most was when I asked her if she ever felt guilty that she was spared from MS and gets to live a "normal" life.

"No. I've wanted to take this from her — I thought I was better able to handle this."

In Jaz, I see someone who is so tied to another in faith and by blood, I dare say she's become accustomed to it. In how she doesn't complain. In how she plans with Melody for the future. In their friendship. This depth of loyalty to family is culturally unique to being Asian American. It is far from typical. More powerful than a spectacular sermon or an encounter in prayer with the Holy Spirit, are the small, unseen, daily choices of our lives when we take ownership of being each other's keeper. 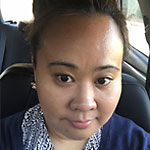 Jaz Jamora is 32 years old. She works full time as a court services assistant. One of her favorite pastimes is watching NBA basketball; her favorite team is the Golden State Warriors. She likes to read “Christian” books and the Bible. She is planning on pursuing her master’s degree in public administration.