Part of 1 of in
By Lauren Dominguez Chan
Photo courtesy of NASA
Feb 04, 2021 | 2 min read
Part of 71: Utopia
7 Snaps
7 0 Snaps
Oops! Something went wrong while submitting the form.

Imagination is at the core of the Christian tradition. Jesus invited listeners to understand the kingdom of God by asking them to visualize surprising scenes: seeds, weeds, yeast, storms. Ignatius of Loyola set in motion a centuries-long practice of imaginative prayer.

In recent years, we’ve spent ample time contemplating dystopias. In April 2016, the "Boston Globe" ran a fake front page that simulated an imagined day of news under a Trump presidency, vivifying the stakes of the 2016 election. It included trade war, attacks on the press, and mass deportations.

In some ways, the reality has been a worse dystopia than anyone could have imagined: children in cages, red-stained skies from wildfires, people unable to breathe from a knee on their neck or a virus in their lungs. Dystopias are real, and they are among us.

By contrast, and by definition, utopia cannot be pinned down. St. Thomas More coined the term “utopia” as part of his 16th-century satirical critique of Christian Europe. The word utopia does not mean “good place,” but “no place” — from the Greek ou, “no”, and topos, “place”. Nowhere.

So we might move to discount utopia. After all, these “nowheres” don’t require our commitment on their own. We need to remember the Martin Luther King Jr. who demanded structural reform and was killed for his demands, not just the one who spoke of dreams. And in order to bear witness to the world we live in, Christians must often resist the wishful thinking that assures us that we’ll be whisked away to heaven soon enough — a theology where the kingdom of God, by all means a utopia, causes us to run away from reality instead of toward it.

But if the activation energy for progress remains high, utopias can be catalysts that refine and discipline the hard work of moving forward. We walk a vanishingly thin line between conviction and paralysis. If we trade only in dystopian worlds, we may become strangers to our own agency to avoid those outcomes.

Through many ways of imagining, from fiction to poetry to personal history, this issue begins to ask: What is required of us when we imagine? What do we owe to one another? How do we create a world in which our aspirational “nowheres” become real places?

These are the questions of utopia, and they remind us: to imagine is only the beginning. 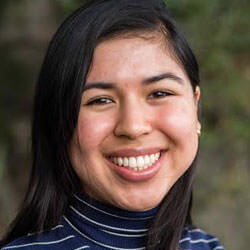 Lauren Dominguez Chan serves as a story producer for Inheritance. Born and raised in the San Francisco Bay Area, she is now a senior at Yale University, where she studies English with a concentration in creative writing. Apart from writing and editing, Lauren enjoys working with her college chaplaincy and other interfaith communities.