The Making of Mary Metchnek

Part of 8 of in
by Naomi Lee with Mary Metchnek
PHOTOGRAPHY BY WONHO FRANK LEE
Nov 01, 2016 | min read
Part of 49: Borders
1 Snaps
1 0 Snaps
Oops! Something went wrong while submitting the form.

This is a story about being shaped by isolation and rejection — and not letting those experiences taint what it means to be accepted and to accept others.

MARY METCHNEK: tanned skin, curly dark hair, and dark eyes. Her speech is tinged with Hawaiian Pidgin intonations and a Midwestern drawl — curiously, words of an African language also easily slip off her tongue in conversation.

Mary is the product of a hodgepodge of cultures and experiences. Through a series of conversations with her, it became increasingly apparent that Mary is quite an intricate human being. In her 20-some years on this earth, she's interacted with a unique set of homes and people. At the same time, her narrative is also laced with rejection — she was marginalized by family, surrounding community, and church from a young age.

But I'm particularly amazed by how Mary has used the knowledge she's gleaned through these interactions. Somehow, she's soaked up a multitude of values, and sifted and evaluated the lessons to formulate her own way of navigating through different cultures and experiences.

Mary is the daughter of two adoptees. Her mother was adopted from the Philippines; her father, adopted from South Korea when he was a teenager, was brought into a Jewish family in Minnesota.

A little known fact: Minnesota has the largest population of Korean adoptees in the world, due to its liberal child welfare and adoption policies. After World War II, there were many orphaned and mixed-race children fathered by Western military servicemen in South Korea. Many Korean families did not want to raise children who were not from their own bloodline, and these children became the first wave of Korean international adoptees. Growing rates of urbanization and increasing teenage pregnancies in South Korea upheld high rates of foreign adoption in the decades following the Korean War, an ongoing war that continues to require U.S. military bases in South Korea today.

A little known fact: Minnesota has the largest population of Korean adoptees in the world, due to its liberal child welfare and adoption policies.

Growing up in Minnesota, Mary was constantly curious about her Filipino and Korean heritages, but rarely received any information about either. Her mother was not connected enough with Filipino culture to pass any knowledge on to her daughter; her father staunchly refused to let Mary learn anything about Korean culture.

Mary's father hadn't had an easy transition upon being adopted and brought over to America. As a teenager, he was forced to teach himself English by reading comic books; he struggled to keep up in school in the midst of language barriers and culture shock. Mary's father learned the lesson of "English is good, Korean is bad" throughout his life, and attempted to instill the same message in Mary.

Mary's father learned the lesson of "English is good, Korean is bad" throughout his life, and attempted to instill the same message in Mary.

"He would tell me, 'English is good. You don't need to learn the other [language].' It was out of fear — I think he wanted to forget what happens when you don't belong."

A mentor introduced Mary's father to Christianity, and began to bring him and Mary to her church — a church that was predominantly white. Mary was acutely aware that she was different than the others. "It's hard to explain," Mary said of her church experience in Minnesota. "It was awkward; the majority of the people looked down on me because I looked different. The way people speak to you — a certain look, a certain vibe ... "

Mary recalls feeling a sense of double rejection; she didn't fit with the Korean adoptee culture, but didn't quite have a place in the mainstream white culture of Minnesota either.

Isolated from her ethnic heritages and snubbed by the white church community, Mary found belonging in an unexpected population: the socially outcasted Somali refugee population.

In 1993, the American government relocated Somali refugees to Minnesota after the 1991 Somali Civil War. Resettlement programs offered Somali refugees resources to help transition to life in the U.S., including housing, health care, and education.

To this day, Somali people continue to relocate to Minnesota to live in a larger Somali community, thus continuing to swell the developing ethnic enclave. In fact, the largest concentration of Somali people in the nation is found in Minnesota — Minneapolis is nicknamed "Little Mogadishu" after Somalia's capital. But despite the large Somali population in Minnesota, many still experience racism, opposition, and marginalization.

"I've lost track of all the times I've had to stand up for my friends against hurtful, hateful things people will say in passing, on a bus, or at school. My friends will say, 'It's okay, whatever, I don't care,' but I know it hurts because I've experienced that, too.

"Part of me always knew that even though I was so loved [by the Somali community], I was different. Sometimes I wished I had darker skin like the rest of my Somali family, while my Somali friends would tell me they wanted light skin like me. But it didn't mean anything to me because that didn't change how I felt. I accepted that I was different, and I didn't try to change it."

Growing up in the Somali community — befriending kids her age, caring for the younger ones, and knowing their parents — made her a part of their family. At one point, Mary needed to leave her abusive household and sought a safe place to live. Her Somali family took her in before she was placed with her Muslim Indian foster mother.

"They're family. Some of my friends will go back and visit Somalia and tell me, 'One day, you'll visit the Motherland,'" Mary explained. "They never hesitate to tell me that Somalia is my home, too."

When Mary graduated from high school, she decided to study marine science in Hilo, Hawai'i — a place of cultural mixing with a complicated, colonized past. It was in Hilo that she found a new community. She found that she was able to adapt to life in Hawai'i almost seamlessly, with people remarking  that it was almost like she was born there.

"I think growing up with so many cultures and languages helps me adapt a lot more quickly than most people do. I appreciate different cultures — they're all beautiful.  This community is where I'm growing up."

Mary's past experiences have informed her decision to study marine science with Hawaiian cultural studies and her approach to new cultures in general.

"People should enter into a new community by first listening and being humble. A lot of times, people come into a certain place thinking they know everything because they heard or read about it.

"People should enter into a new community by first listening and being humble."

"Taking time to be in the place and with those people is really important."

Mary's ethnic background helps her seem like a local Hawaiian, but she says that her sense of belonging is also largely attributed to her renewal of faith through various InterVarsity Christian Fellowship events. "Wherever God will lead me, that's where I will feel at home."

As she talks about her journey to Hawai'i, Mary reflects, "All my life, I always wondered why bad things happened to good people. After going to counseling, I realized that [unfortunate things] happened in my life, but God walked with me through all of it. I have these experiences, and I never want them to happen to others, too. Or if someone does experience those things, I know how to help guide them through it.

"God has placed so many mentors in my life who have helped guide me. He blessed me with a positive attitude to always look at the good side. Maybe I did struggle, but that struggle made me who I am. Now I am able to help others. I can be that voice that empowers others to speak up for themselves, or I speak up for them when they can't."

Maybe I did struggle, but that struggle made me who I am. Now I am able to help others.

As Mary continues to open her heart to new places and people groups, I realize something astounding: Although her life may have been shaped by many national and social borders, she is still one whole person. Mary Metchnek does not embody a meeting of magnetized opposing sides, but rather, a subtle blend of hope and acceptance.

Naomi Lee is a recently graduated student from Whitman College, trying to find her way through the world. She cares deeply for social justice issues and is passionate about writing. In her free time she enjoys watching “Steven Universe” and reading fiction. 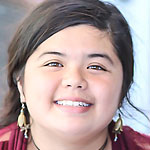 Mary Metchnek is an undergraduate student at the University of Hawai’i at Hilo majoring in marine science and minoring in Hawaiian studies. She loves music, photography, painting, and animals. She adores her younger brother and sister who live in Minnesota.