And a Christianity Today podcast episode that perpetuates this thinking

Updated on April 11, 2017 with responses from Mark Galli and Kenji Kuramitsu.

These are familiar stereotypes. They are also false. But from whose imagination did this racial fiction emerge? Whose purpose does the model minority myth serve and harm?

The idea that Asian Americans are a “model minority” developed in the mid-20th century, in a complicated social cocktail with one major catalyst: white backlash to the civil rights movement. As historian Ellen Wu notes, one popular U.S. News & World Report article, published at the inception of Black Power, reported, “at a time when it is being proposed that hundreds of billions be spent to uplift Negros … the nation’s 300,000 Chinese Americans are moving ahead on their own — with no help from anyone else.”

In the 1966 New York Times article that first coined the term “model minority”, Japanese America’s “success story” is directly contrasted with the challenges faced by “the American Negro”.

The author’s implicit argument is that “the playing field is level now; the Asians did it, why do the blacks need help? You African Americans must be inherently unintelligent, lazy, criminal.”

As organizer Scot Nakagawa writes, “anti-blackness is the fulcrum of white supremacy”. That is, the engine of American racism was established only by combusting the fuel of black labor, resting on a legacy of chattel slavery and continual economic disempowerment. As scholar Andrea Smith has argued, all racial myths are constructed in order to continue to define black people as consumable husks, indigeneity as fertile subject for occupation, and immigrants of color as the exploitable Other.

Throughout the discussion, Hill, a black Christian, shares his feelings of betrayal by white evangelicals who voted for Donald Trump, suggesting ways for the white church to reckon with its own history of racism that has endured past the civil rights era. During the episode, Galli pushes back on Hill’s racial analysis, preferring to think of racism more as relic, a “Bull Connor” kind of racial animus. Galli also wrestles aloud with his own visceral, “gut-level” feelings around Asian Americans.

“For some reason, I would have more confidence in a, probably a doctor, who is Asian than one who is white. I have this impression of Asians as being really smart, hardworking, and very conscientious. I think whites are that way too. But I think the Asians, I just, my experience of Asians, my reading about Asians, and my personal experience of Asians, is they are really good at these sort of things. So I tend to have more confidence, implicit confidence.” He then asks, “So is that a racist comment?”

Professor Hill responds that these comments reflect “more of a prejudice than racism”, but doesn’t explain the difference. Hill goes on to say that Galli’s example is problematic because he is “robbing the white brother or sister of his or her individuality”.

Here, Hill’s immediate concern is defending the “image of God” in the white person. Not “the Asians”, whom Galli flattens and strips into cheap facsimiles of human beings, and not the unnamed but implicitly present black person, slighted through the cheap projection of Asian valor. Hill chooses to center “the white brother or sister” — the white body as a neutral frame of reference, a unique bearer of God’s image, a basic building block of humanity. This is an error of glancing in the wrong direction. To claim that the model minority myth hurts white people is profoundly mistaken.

We must remember the history of the model minority myth and the function it serves. The true purpose of viewing Asians as superior is not to compliment Asians nor to denigrate whites, but to undergird black oppression. Whenever someone says, “Asians are naturally (insert positive characteristic),” the unspoken corollary has been, and continues to infer, “and black people are not.”

Galli replies by doubling down. Recounting a vague anecdote about Asian students on California college campuses, Galli reports “they were so smart and so hardworking, they were taking up more spaces ... So that’s based on an actual fact: that Asians are, in fact, smarter, harder working.” He adds: “When I deal with an Asian in a professional context, my experience is that they’re really well-prepared.”

Lee later challenges Galli and asks about structural forces that determine Asian success, questioning whether Galli’s “fact” is really fact. When Galli is encouraged to look into similar instances that might further reveal his racism, he responds, “I really don’t have the time or energy.”

The model minority myth lacerates our African American siblings, and other people of color. It ignores the swaths of Asian Americans who suffer from massive poverty levels. It imperils both our communities. Asian Americans must reject the way whites impute intellect or craftiness to us, often deeply entangled with xenophobic anger over immigration, international intrigue, and American economic woes. Over four Asian Americans have been murdered this year already, shot either by eager neighborhood security guards or white nationalists emboldened by the November election.

Asia is the world’s largest continent (of which Europe is a small peninsula), and its diaspora boasts thousands of discrete cultures. To speak flatly of the singular advantage of “Asian culture” is laughable. It is not, as Galli testifies in Trump-esque rhetoric, “an actual fact that Asians are, in fact, smarter, harder working”. This is an “alternative fact” — a fiction devised by white supremacists to slander black dignity.

These comments are toxic and warrant an apology. At the time of this writing, I could not find any critical mention of Galli’s remarks on any social media, blogs, or websites. Why is it acceptable to use our communities as a wedge, rather than seeing us as fully and basically human?

For the editor-in-chief of Christianity Today to make these kinds of racially obtuse arguments about any ethnic group is absurd. But because it is about “the Asians”, we’re supposed to let it stand.

That is, if we even notice.

Thank you for taking the time to respond and for engaging in this conversation. I hope that this can be helpful to others as well.

While you say that your feelings about Asians are based on personal experience, not prejudice (or "pre-judging, as you describe it"), it doesn’t excuse them. If you have a “life-time of experience and personal contact” leading you to "viscerally" distrust Latinx people, for example, that is also prejudice, and it’s an example of racist bias.

In your case, this experience comes from a lifetime of being white; your "experience of Asians" is related to the fact that you occupy a certain social position – the highest location, against which all others are defined. We can’t ignore the social and historical contexts in which these prejudices are formed. Your individual experiences are part of larger social and historical patterns.

What I suspect Dr. Hill was trying to explain is that racism is not a two-way street. We are dealing with something here called white supremacy. This is a system of social sin, in which we are all ensconced, set up to enshrine dignity and holiness in white bodies and to dehumanize people of color. Remember that we cannot speak "equally" to one another when nearly every institution in our society has been configured to only celebrate the image of God in people who look like you.

Although you might not have intended to dehumanize Asian Americans or African Americans, there still is a greater and lethal historic context here. Your words as the editor of a major evangelical publication were hurtful, and played into these legacies of violence. Your individual intention to "speak honestly" needs to be pitted against the disfigured racial history that your words emerge from.

The problem isn't that "the different races aren't speaking honestly" to each other, Mark. The problem is white Christians are not listening. They're not listening when we express our pain, which Dr. Hill did on the episode, or when we point out the ways we continue to be harmed by benign or overt racism in your institutions and churches.

Reconciliation requires a confrontation with wrongdoing. When you drop the "I'm such a sinner" line, it reads to our community that you simply want to gloss over this issue, to say “let’s move on” from our current political and racial issues. But as people of color, we can’t just move on — this is our daily bread. Yes, we are all caught up in the deep webs of institutional and personal sin — but we can’t keep ignoring the distinctions between your social location and ours.

The point isn’t to “confess” how racist we are, using “personal experience” to excuse our prejudice. The point of my article was this: anti-blackness is the organizing principle of white supremacy. The racial myths you now claim are opposed by your reading were carefully constructed to downplay black oppression in the US. The valor you “viscerally” and “instinctually” impute to Asians is directly rooted in centuries of anti-black racism. The two myths – black sloth and Asian exceptionalism – are connected, and were created intentionally.

Were those your intentions? Perhaps not — but that is our history. Your words matter here. We were all born deep into this ongoing story, into a living tapestry of words that continue to haunt us today. 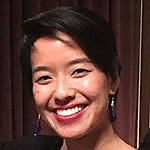 Caren King Choi is an artist, writer, and nonstop doodler from New Jersey. She studied art and writing at Colgate University and works as the Associate Director of Programs at Rutgers University-Newark. She and her husband live in a one-bedroom apartment that is steadily being overrun by books (hers) and guitars (his).