Part of 6 of in
By Chucky Kim of ruth + the library
Photography BY Andrew J. Park
May 01, 2016 | min read
Part of 43: SacredProfane
6 Snaps
6 0 Snaps
Oops! Something went wrong while submitting the form.

The band’s producer and bassist Chucky Kim weaves an account that resembles more music than prose; he speaks as a witness to his time and as an accomplice to their collective trajectory.

WE REALLY DIDN'T HAVE A STYLE. It's not like our parents knew how to teach us, they were barely able to keep the lights on. They needed a break, so they took us to church. There, we found music. We weren't so much looking for a style though, we were just trying to feel something. But as with anything, church got old, too. So we ventured out, searching for new feelings. Coffee shops, jazz clubs, punk scenes.

We didn't know it at the time, but we were scouts. Exploring a new land, bringing artifacts to our people. Yet this search also brought certain ambitions: to be known, to be heard. So we started singing our hearts out into computer screens, hoping someone would take notice. And we did it first, built a movement in a way. But this still isn't fully our land. So others rose above, and quicker. This was bound to happen though ó we sang their songs and told their stories. We focused so much on wanting what they had that we didn't see what was already in our hands. Our parents left everything, but they kept their stories. Maybe it's time for us to come home.

It's often joked that Koreans run one of three things: liquor stores, dry cleaners, or churches. My parents have done all three, with church as their final destination. I became a pastor's kid late in the game, during my sophomore year of high school. It was also about the same time when I personally chose this faith as my own. Perhaps because I was older, I was fairly aware of what this transition meant.

It's often joked that Koreans run one of three things: liquor stores, dry cleaners, or churches.

It was more than simply a lifestyle change; it meant a context shift. Prayer meant more than money, belief more than experience, and faith more than ambition. For a world bent on the accumulation of resources, this change meant a life spending your spirit on others. It was a profound exchange, one that taught me that our deepest resource lives within ourselves.

Yet there are costs to such knowledge. Financial and emotional security is not guaranteed in such an exchange. A family dedicated to such values does not necessitate financial struggles, but it does demand an alternative form of living. Such a choice was tough on our family, but it carved unforeseen depth into my story.

I'm drawn to artists who come from similar backgrounds, who happen to be pastor's kids. Gregory Porter, D'Angelo, even Zion.T from South Korea. There's an ethereal quality to their vibe that gestures toward a substantive core: music that seeks to excavate the soul, unveiling truth in its most personal and universal form. There are frequencies and vibrations that connect us, and perhaps if we are diligent enough, we may be granted privilege to take part in its shaping.

I suppose this pursuit makes sense for these artists: They've spent their lives watching their mothers and fathers work to communicate the meaning of this existence — often at great familial, emotional, and financial cost. They've also attempted, whether successfully or not, to build a community around such expressed values. Perhaps these artists took what they discovered in church and worked to instill it in the world. They worked to blend the sacred and the profane.

My projects have sought to do the same. Salvation themes transposed into yearnings of home, prophetic cries voiced as empowerment narratives. There's an essence to creativity that liberates the self to love the self, freeing community to share in such freedom. To me, the best artists occupy this liminal ground between musicality and spirituality, offering themselves as a symbol.

The best artists occupy this liminal ground between musicality and spirituality, offering themselves as a symbol.

There is no locale to such a tone, rather only a posture to embody. Ruth + the Library hopes to blur that often-policed line between the sacred and the profane by offering a sound that is unique to us, yet shared by many. We're a collective of musicians, songwriters, and producers who are synthesizing our most treasured forms of music: soul, funk, and K-Pop. We call this sound we're shaping K-FUNK. It's an homage to our roots, and it intentionally rhymes with G-Funk as a nod to our west coast bounce.

We first met in church. It was a simple evening service, and the band that night was a cluster of friends who happened to know other friends. The service was peculiar; the worship leader gave us the liberty to rearrange the songs in the way that we wanted. So our guitarist, Dag Lee, reharmonized the songs into more soulful interpretations that we'd traditionally recognize as soul, jazz, and R&B. Instead of G major chords, we played E minor 9s, painting blue hues where you would generally see yellow. Hope, here, was blues-tinged, as the great philosopher Cornel West would say.

Dag built the first bridge, bringing a quiet librarian named Ruth to the keys. She would ultimately become the heart of the band, her story and sound the anchor. Dag would answer her music with these funky guitar lines, reminiscent of Paul Jackson Jr., his blessing all over those Michael Jackson records. I got the call, ushering my bass lines into the mix, elevating the pulse of the off-time to push the band in-time. My contribution to the group was calling in Abraham, a legendary drummer who shaped so much of what Asian American rhythms were at the time. In so many ways, we're still riding off his energy today.

At that point, we had all spent time in various venues, searching for sounds that articulated our sense of being with the truth of who we were. What could have been a disastrous experiment turned into a joyful discovery: We played our hearts out, glued together by a shared sense of groove, wonder, and spirit.

What bound us was the funk: a bravery to color outside the lines, substituting what you expected with what shook your ear. In our band, funk is more of a philosophy than a mere genre, where rules binding you to what is allowed ultimately guide you toward the freedom of fluidity, breaking harmony into discovery.

Funk: a bravery to color outside the lines, substituting what you expected with what shook your ear.

This was a moment where we found ourselves, where we found each other. We take heart in the final revelation that Scripture offers: There is no temple in the center of the new city, only people around whom the Spirit walks. Through Ruth + the Library, we hope to offer a humble glimpse of this. The Spirit has always been guiding us both within and outside the walls of church, and now deeper into the temple where God ultimately resides.

We believe God gave us the gift of music so that He could speak to us. We don't mean this figuratively. God gives us something simple enough to perfect in order to widen the path of communication. The deeper we grow in our craft, the clearer the whispers become.

These whispers are everywhere. Churches. Coffee shops. Clubs. Theaters. We just have to be hungry enough to hear.

Chucky Kim is a music producer and bassist. Based in Los Angeles, he works both locally and internationally in genres spanning hip- hop, funk, rock, and pop. As a graduate of Harvard Divinity School, his research interests include examining the ethics of creativity in community arts contexts. Find him instagramming his wife and pups via @chuckykim_ and logging his work at chuckykim.com. 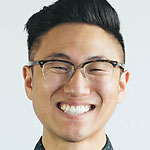 Andrew J. Park is a child at heart, a DIY enthusiast, and a missionary partnered to one helluva woman. He worships God as a digital storyteller using photography and videography. To see more of his work, check out andrewjunepark.com.