They Don’t Want Us to Get Married

Cultural and generational differences can create rifts in a family, but those differences can shed light on shared struggle. Empathizing with one another is the beginning of the process of reconciliation.

It was an unusually warm March night in Northern Indiana. The expansive Midwestern sky was illuminated with starlight, but the beauty of the night was dimmed by the ire in my heart.

Months earlier, I sat at the kitchen table with Alyssa’s parents and asked them about marrying their daughter. At the time, I thought we had a good, though brief, conversation about marriage and that I had their blessing.

I assumed the brevity to be part of the language barrier. While her parents spoke English, they were most expressive in Taiwanese and Mandarin, so I knew our conversation was going to be limited. Based on our previous conversations, I thought we had reached a good understanding of one another despite the language divide.

I thought we had reached a good understanding of one another despite the language divide.

Looking back, I realize I was not culturally aware of the usage of quasi-tacit “approval” as a way to avoid difficult conversations that is present in some of Taiwanese culture.

While they were saying, “OK” and, “That is good” to my face, they did not endorse me for marrying their youngest daughter.

After I proposed, we called my parents who were overjoyed. Then we tepidly called her family. We had a suspicion that they would not express the same level of excitement as my family, but were still not prepared for her mother’s response:

“Josh asked me to marry him.”

Alyssa’s words still reverberate audibly in my head: “They don’t want us to get married ... ” The conversation disintegrated into a series of parental shaming techniques: Her mom told her she had to finish school and get a doctorate (something Alyssa did not want to do); she suggested that Alyssa was immature, claiming that I was not old enough or responsible; and she lamented that our children would be “mixed”. Her mom was in opposition to our marriage.

Several months later, we discovered that Alyssa’s parents’ disapproval was tinged with racism. Not only did they think that Alyssa wasn’t ready, but my Blackness was a barrier to them. They had never had any significant relationships with any Black people. Their schema of Blackness was constructed by the evening news’ tendency to over-report Black crime, stereotypical Black characters on television, and the mythology of Black men as irresponsible, adulterous, and hypersexual.

Their schema of Blackness was constructed by the evening news’ tendency to over-report Black crime, stereotypical Black characters on television, and the mythology of Black men as irresponsible, adulterous, and hypersexual.

While Alyssa knew her parents had prejudices of various backgrounds, they had a hierarchy of Alyssa’s possible suitors: Taiwanese, Chinese, Japanese, and white (non-specific). However, Alyssa did not know just how low Black was on that list, or that it wasn’t even on the list.

Alyssa’s parents emigrated from Taiwan in the early 1970s. Her father moved to Madison, Wisconsin and several years later her mom came to join him. Her mom and dad toiled in the restaurant business from their beginnings in America. Her dad was busy in the kitchen while her mom took orders as a waitress, working 80-plus hours a week to provide for their family, save money, and achieve the version of the American Dream they thought they wanted.

Eventually, after working in other people’s businesses they started their own restaurant in Naperville, Illinois. Alyssa and her sister spent their days helping at the restaurant, while Ama and Agon (their grandparents) took care of responsibilities at home. Despite living in an affluent suburb, they functioned in the working class and struggled for everything they had. Alyssa’s parents wanted their daughters to have more than they had, even if that meant putting on the appearance of affluence. They wanted their daughters to succeed, to thrive, and to fulfill the dreams they pursued.

They wanted their daughters to succeed, to thrive, and to fulfill the dreams they pursued.

My parents are from rural Virginia. Brookneal is an old tobacco and agricultural town. In its ripe season, the town was the center of business for that part of rural Virginia. A shift in industry and technology forced out jobs, along with resources of money and educated community members.

Brookneal is also a prominent place of the racist legacy of the Untied States. My parents experienced the overt racism of white society as well as the covert racism of white politeness — the kind that follows Southern hospitality during business or while walking across the street, but is really defined by an ideology of white supremacy that emerges whenever sacred social norms and hierarchies are threatened. They went to separate and unequal schools their whole lives, and even as the Civil Rights Movement emerged while they were teenagers, the benefits did not fully reach their rural milieu.

Like Alyssa’s parents, my parents also migrated — moving to the city hoping for a better future for my siblings and me. They worked in construction, on the railroad, in the school cafeteria, and drove buses. We did not have much growing up, but we had enough, and I was imbued with values that sought the kingdom of God before my own personal gain. My parents were led by their Christian faith to pursue love over hate, and reconciliation over division even though their story provided them more than enough fodder to reject those aspirations.

That was what my mother greeted Alyssa’s mom with during their first phone call after we got engaged. My mom called Alyssa’s mom ... just because. She was unaware of the tension we had experienced with Alyssa’s mom when we announced our engagement to her.

Alyssa’s mom was not expecting a phone call and often gets a little nervous when she gets a call from someone she doesn’t know. However, throughout the conversation something special happened. My mother shared who we were as a family and provided counternarratives to the schemas that Alyssa’s parents constructed.

As an immigrant with a strong accent, Alyssa’s mom was used to being treated as unintelligent and brushed off in conversation. The tinge of white arrogance and ethnocentrism was pungent in the undertones of customers’ “nice” communication. But in this conversation, she felt heard and known. It just so happened that my mother had been teaching women to read at our public library as part of her requirement for an associate degree. These women were from China, South Korea, and Taiwan. “I understand how it feels to not have a voice,” she said to Alyssa’s mom.

As an immigrant with a strong accent, Alyssa’s mom was used to being treated as unintelligent and brushed off in conversation.

In this less than an hour, we took a small step toward reconciliation. While this didn’t change the stereotypes she held about Black Americans more generally, it did change the relationship between our families. We noticed things began improving.

One of the unexpected ways that our parents connected was through the narratives of the other’s parents. Our families unexpectedly found a connection in our past. Though more than 7,000 miles separated our grandparents’ homelands, their stories echoed one another’s.

Though more than 7,000 miles separated our grandparents’ homelands, their stories echoed one another’s.

Agon and Ama, Alyssa’s maternal grandparents, grew up poor in an occupied land. Japan’s Southern Expansion Doctrine was in full effect as Agon and Ama were young. Their life was dictated by a colonial force — with the Japanese Empire benefiting from their labor and efforts.

Similarly, my paternal grandparents from Virginia spent their youth in the midst of Jim and Jane Crow laws and the explicit racism of the early 1900s. Their opportunities were also dictated by an outside entity — a whiteness that did not want to see them succeed while barely considering them human. They saw violence imparted on the bodies of Black men and women, they themselves being the product of white male sexual dominance over rural Black women with little power or agency over their own bodies.

Even in the small things, we comically found connections. Both Taiwanese and rural Virginian cultures value hogs, and both cultures operated historically on scarcity, thus, eating all that you had. Chicken feet and pigs feet were not abnormalities for either Granddaddy or Agon’s diet.

Since the wedding (almost 10 years ago!), our families have grown closer. My parents actually spent a long weekend with Alyssa’s parents in Chicago. They shared food, cooking tips, gardening secrets, and have become friends.

Through frustration with the existential reality of sin, racism, and parental expectations, God was difficult for us to see, hear, and feel. We have discovered that the still small voice of God works in this way: in the difficulty of acknowledging God.

Reconciliation takes time; it takes the slow changing of hearts.

God was there through it all even though it felt like it was impossible for God to be present in the midst of opposition fed by cultural systemic injustice. Sometimes we only notice God’s faithfulness after struggling through adversity. 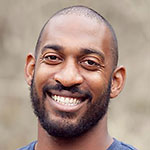 Joshua Canada is a nonprofit and higher education professional who has served and provided leadership within a number of nonprofits, churches, and educational institutions. Joshua serves on the Local Board of Administration of the Free Methodist Church of Santa Barbara and sat on the founding board of Uffizi Missional Order. He is a hip-hop & jazz aficionado, percussionist, avid reader, amateur cook, creative soul, and madly in love with his wife Alyssa and daughter Maya Lin.