To the Moon and Back

In Search of a Homeland

Part of 4 of in
by Jintaek Chung
ILLUSTRATIONS BY CAMILY TSAI
Dec 01, 2016 | min read
Part of 50: Homeland
28 Snaps
28 0 Snaps
Oops! Something went wrong while submitting the form.

I REMEMBER sitting in the back seat of the cab with my mom, staring up at the glowing white moon hovering over Korea — my ancestral homeland — and it kept following us.

In my young, 4-year-old mind, this was very bizarre; surely, the farther we drove, the farther away the moon should be. In my fluent Korean at the time, I explained this lunar phenomenon to the cab driver, and he graciously listened to me with his smiling eyes on the road.

Once we were back in Chicago, my mom and I walked through the backyard of our home, and as I looked up at the clear, morning blue sky, there was the moon again! I immediately pointed this out to my mom, and she told me that it indeed was the same moon that we saw in Korea. It was incredible!

That was the last time I visited Korea, but this distinct experience foreshadowed another peculiar reality that followed me around as I grew up: coming to grips with my Korean identity and the multicultural surroundings I found myself in.

As a Korean kid growing up among whites, Latinos, Blacks, Middle Easterners, and Asians, in Chicago, I hated my own name: Jintaek Chung. Could it get any more un-American?

I hated my own name: Jintaek Chung. Could it get any more un-American?

In elementary school, I waffled between picking "Michelangelo" or "Raphael", the names of my favorite Teenage Mutant Ninja Turtles. But I settled for "Jin", a more pronounceable version for non-Koreans. I was an urban American kid with hip-hop programmed into my cultural DNA, and a Korean name such as mine seemed to be a misnomer.

Naturally, when I entered my middle and high school years, I found myself gravitating to those of the "AzN" crowd, or Asian Americans who were into hip-hop and had orange-yellow highlights in their hair, many of whom were Filipino. This group almost felt like family as we spent countless hours together at our true home: the mall. I then began embracing my now-cool AzN name and began tagging it in notebooks and yearbooks in graffiti-style art, complete with an abstract silhouette of the Chicago skyline sitting on top of my name.

I moved closer to the actual skyline when I went off to college, and I crossed paths with some Filipino AzNs who started up a campus ministry called Living In Faith Together. It felt as if my AzN phase of life, combined with my church upbringing, had prepared me to become a part of this hybrid group. I soon joined them at their home church, Northwest Filipino Baptist Church (now known as Trinity Gospel Church), and the members treated me like one of their own; I felt completely at home with them and it was almost easy to forget at times that I was of a different ethnicity!

I felt completely at home with them and it was almost easy to forget at times that I was of a different ethnicity!

Through such welcoming familial love within this church and campus ministry, I learned more deeply what it meant to truly belong to the family of Christ as they embraced me with open arms, my un-American name and all. During the years of growing and volunteering in this nurturing community, I also began sensing God calling me to spend the rest of my life as a pastor, even while my lingering thug-wannabe propensities of the past continued to tug at me.

I entered into the masters of divinity program at Trinity Evangelical Divinity School for pastoral studies, and once again, the majority of my close friends on campus were Filipino! What seemed like a God-ordained trend of being surrounded by Filipinos increased exponentially during my final year there.

While doing research on Filipino culture for a multicultural counseling course project, I also embarked on a personal side project to pursue a Filipino girl named Rebecca, who I reconnected with that summer. I was fortunate to have parents who had readily embraced my brother's wife, a Chinese Filipino, without ever bringing up her race as an issue.

And after getting the blessing of Rebecca's father, I began courting her, spending countless hours with her family, in tune with the Filipino tradition of courtship called ligaw, or essentially courting the whole family. Her father began calling me anak, which means "my child", and even gave me a key to their home, giving me absolute freedom and encouragement to spend time with them as a member of the family. I felt more Filipino than ever.

Her father began calling me anak, which means "my child".

Around the time that this romantic courtship began, I also began courting Northwest Filipino Baptist Church as a pastoral candidate, and once the deacons approved, I began courting the whole church family in a parallel ligaw fashion. I hit the ground running by putting into practice the cultural norms that I had read about and personally experienced; they became avenues through which I could shine the love of Christ to the members.

A norm that I relentlessly tried to put into practice was pakikisama, or the commitment to harmonious interpersonal relationships. I found myself being especially intentional in conversing with the first-generation Filipinos who might have been tempted to assume that I was too different from them; I tried to keep up with what was going on in their lives, whether it was in the church lobby over a cup of coffee or in a laughter-filled dining room around a home-cooked Filipino meal.

Growing up, I learned to keep a relational and physical distance from older Korean adults out of respect. But in this Filipino community, I had never side-kissed, side-hugged, and laughed alongside so many older people in my life.

Growing up, I learned to keep a relational and physical distance from older Korean adults out of respect.

These first-generation Filipinos were not into hip-hop, nor did they have orange-yellow highlights in their hair like my old AzN crew (unless it was to mask any graying hairs); yet I readily recognized that longing for the sense of belonging that they left behind at home in the Philippines, and God was calling me to love them as He loved me. They belonged to God and also to me, a Korean brother in Christ who once hated his own name, a name which to them had come to represent a sense of belonging here in America.

The more I study the Scriptures and see the racial tension going on in our country and the world, the more I realize God's heart to see the Church rise up and stand in the gap of the racial divide as bridge-builders. I've personally experienced how the gospel has the power to bring people of different ethnic backgrounds together to find healing, and God continues to graciously lead me on this journey. In a culminating way, the next stop on this path at the end of this year happens to be in South Korea.

As I prepare to fly there to officiate the wedding of my Filipino friend from the old campus ministry to his Korean bride-to-be, I wonder how being physically present there will affect me. The ceremony is set to take place in a historic location that was built over a century ago and looks more like an ancient palace in a Korean period drama; the architecture alone envelops you in Korean history.

I imagine I'd feel embarrassed by my broken Konglish, with lots of nervous smiling, incessant nodding, and bowing, thanks to my training in America from conversing with first-generation Koreans. Will I feel like a cultural prodigal who made his way "home", feeling like I have no right to stand in that historic Korean house of God among the faithful "older brothers"? I don't know.

Will I feel like a cultural prodigal who made his way "home"?

But I'm OK with feeling a good amount of initial dissonance in trying to feel at home there. I know whom I belong to: the One who has been leading me on this exilic journey toward true joy and freedom, unexpectedly through helping others belong, meeting them right where they're at. When I stand there at the wedding altar as a Korean, AzN American, adopted-Filipino pastor, looking upon the faces of my Filipino and Korean friends whose lives will become one in marriage, I'll look forward to continuing to be a part of the greater mission of God, which is to bring people of different ethnic backgrounds together by His grace.

This mission brings me back to my name, Jintaek, the name my grandfather gave me, which means "pond of truth". I've come to embrace my grandfather's hopes for me to become exactly that — a person of rest by reflecting the truest thing that I have come to know: the gospel.

Just as the moon reflects the light of the sun, I aim to be a conduit for reflecting the boundary-crossing, sacrificial love of Jesus, the Son of God who fully embraced me on the cross with open arms. Whether I'm in Chicago, Korea, or anywhere else that God may lead me, I hope everyone I cross paths with will experience rest as they see this reality and their own reflection in me: a fellow sojourner who, on the search for belonging, was found by a relentlessly loving God.

Just as the moon reflects the light of the sun, I aim to be a conduit for reflecting the boundary-crossing, sacrificial love of Jesus. 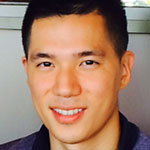 Jintaek Chung pastors alongside his Filip-ean family at Trinity Gospel Church. With a master of divinity degree from Trinity Evangelical Divinity School, he continues to be a student of culture, hoping to connect people of all backgrounds with the Gospel. His high view of Scripture tends to be accompanied by an unconventional amount of slang.