Too Close for Comfort

Being Pregnant and In Pain

Part of 3 of in
by Aimee Sher
ILLUSTRATIONS BY PAOJU LIN
Aug 01, 2016 | min read
Part of 46: Proximity
0 Snaps
0 0 Snaps
Oops! Something went wrong while submitting the form.

Whether it’s a celebration of hope realized or a sober rearranging of the future, pregnancy in all its circumstances entails a multidimensional, physical reality for the mother.

I BECAME PREGNANT immediately after we began to try for a baby. I thought I was ready.

What they don't tell you about pregnancy is that in primates, the fetus has the unique ability to implant its placenta directly into the closest large blood vessel of its mother. The fetus implants aggressively, injecting hormones into the blood vessel to make the blood volume increase. The blood flows faster, raising the blood pressure of the mother.

In every other mammal, the mother can control how much nutrition to share with the baby. Not so in humans — all the mother can do is release her own hormones to counter this aggressive intrusion by the fetus. My doctor jokingly says that I'm growing a tiny parasite, which is honestly more or less true.

In every other mammal, the mother can control how much nutrition to share with the baby. Not so in humans.

What I also didn't know was that this can cause a wide range of complications. In the most pregnancies, you hear about morning sickness, swelling, and blood pressure changes. Moms talk about how strange it is to share their bodies with the baby and how it's hard to get used to being alone again after that.

In more severe cases, mysterious conditions persist. I was one of the lucky 2 to 3 percent to experience hyperemesis gravidarum, or severe debilitating vomiting and nausea during pregnancy. Starting around six weeks, I became very sick. By eight weeks, I was vomiting eight to 20 times daily within a span of four to six hours in the evening, and was nauseous all day. I lost more fluid than I was taking in. I would stay up until 4 or 5 a.m. trying to sip at water and struggling to keep it down. It felt like the baby I wanted so much was slowly killing me.

I was losing control of my body. Before we knew the gender, before I could feel movements, the only signs of my pregnancy were severe vomiting and loss of fluids. I was tired all the time, and I injured my back with repeated gagging that irritated my muscles. I remember driving to physical therapy two mornings a week in a haze, trying to recover from the previous day's vomiting. Each vomit would tire me out; I was comatose the rest of the time, lying in bed between wakefulness and sleep, in recovery until the next one wore down my energy reserves even more. I couldn't keep down enough fluids, and I felt like I was failing my baby already and was an awful mother.

It is hard to overstate how much pain I was experiencing. I was miserable and constantly exhausted, was prescribed the same nausea medication that is given to chemotherapy patients. The intimate and exquisite torture made me resent the life I was growing, and I regretted ever becoming pregnant. Even those first appointments when we heard the heartbeat for the first time hardly brought me any happiness. The brief, fleeting joy of seeing a little peanut in that eight-week ultrasound was muted at best.

The brief, fleeting joy of seeing a little peanut in that eight-week ultrasound was muted at best.

I thought that my husband Roy and I had been growing more emotionally intimate during our first year of marriage, but this pregnancy made it necessary for us to be uncomfortably close. He would hold my hair and rub my back while I vomited, and exchange the mixing bowl I was holding for another when the smell became overwhelming. The reality of having this baby inside of me manifested as something putrid that burned my esophagus. My husband became intimate with the contents of my food and in caring for me. In some ways, he became my caretaker and parent.

This pregnancy made it necessary for us to be uncomfortably close.

I was sleepwalking through my days and trying not to vomit around my piano students. In those moments of intense, violent vomiting, my private pain became something that I shared alone with my child who was still growing inside of me. The fetus that I could only call an "it" without knowing its sex yet was my closest companion, silently developing in my belly and continuing to pump me full of the hormones that were making me so sick while my body and my life slowly fell apart.

At 10 weeks, Roy drove me to the emergency room at midnight because I hadn't passed anything more than sad, brownish pee for two days. We waited hours and were not treated. We were told we would have to wait there until morning before a doctor could see me. In despair, I went home, and in those hours while my husband slept, I cried alone with the baby in my womb all night. That dark night, I considered suicide or termination of the fetus as a way out of my pain. Both of those seemed like less painful options than continuing to go through this for what could be the rest of my pregnancy. I still had 30 weeks to go.

The next day, my doctor prescribed home care intravenous fluids. I can't express the relief — knowing that I could stop worrying about hydrating my body and caring for the baby with hydration. For eight hours a day over the next eight weeks, I was attached to a bag of fluids and nutrients at home. Needle sites, track marks, and bruises became a familiar sight on my arms. I began to explain to my students what the needle stuck in Ms. Aimee was. I continued to vomit every day, though a little less since my body was less stressed from constant dehydration. I also prayed desperately every day for it all to stop somehow.

The beginning of my second trimester came and went, and I coped with friends and family opining, "How can you still be sick? It's not your first trimester anymore!" everywhere I turned. Some times, I smiled bitterly and said nothing, and other times, my temper snapped and I told them to mind their own business. My battle became a private one as I no longer felt safe about sharing my pain with anyone other than my husband and my health care providers. Everyone else was telling me I should be feeling better by now, and I just wasn't. Hyperemesis gravidarum sufferers don't have the luxury of getting better after the first trimester like most other pregnant women.

My battle became a private one as I no longer felt safe about sharing my pain with anyone other than my husband and my health care providers.

Five weeks into my IV treatment, I felt the first gurgles and flutters that I thought might be the baby. In the next few weeks, they became stronger as I, too, became stronger and healthier. My body looked undeniably pregnant, my breasts full and my tummy bulging with a small but obvious bump. I joked to my friends that I looked like some sort of fertility goddess, but I didn't feel like it.

In those first days of the kicks from the baby and as my vomiting started to get down to 10, then five times a day, I finally started mentally processing what I was going through. I couldn't quite believe it as my mind became clearer and the fog of exhaustion lifted a little. My level of exhaustion began to feel like a "normal" pregnant person's, instead of the "knock me down" and "I've been hit by a truck" kind.

The baby's kicks became my constant companion and I experienced a new, different kind of intimacy with my baby. I treasured every one of those little movements in those first weeks, because although I was still pretty sick, it finally looked like and felt like I had something to show for it. I marveled at the movements and talked to the baby, responding to the kicks as if the baby were already here in the world.

In those happy moments, I remembered the God's sacrifice. I got a horrific hint of the intimate torture and pain that Christ went through on the cross — and I imagine it would've been a thousand times more acute than mine — where even His body was sacrificed for us.

It became so much more real to me when we started talking baby names and I could feel the baby's kicks more frequently. I told my friends that I'd go through the whole process again for this particular baby, but wasn't sure if I'd do it again for another hypothetical baby.

But as I struggled to think about expanding our family further, I realized that God would go through the pain again and again for every single one of us. I'm not sure I can fully grasp what the grace of God is like as a parent. But as His child, I'm starting to get a glimpse of the depth of the sacrifice and love He has for me.

God would go through the pain again and again for every single one of us.

At 18 weeks, I was finally well enough to be off the IV treatments. I continued to take my medications and vomit a few times a day, but it was no longer debilitating the way it was before. Two weeks later, we went to our big anatomy scan and found out we were having a little girl. That week, we chose a name. Kaylee Anne Sher became fully real to me that day. I began to count little Kaylee's kicks and describe them to Roy in excruciating detail. He often spends time listening to her with his ear on my belly.

As she and I continue to grow bigger, I am starting to understand the joy of parenthood and of loving someone in this way. I see God's love for me strongly reflected in the intimacy between mother and child, and Roy and I are counting down the days until we reach each next milestone together as parents.

At 25 weeks pregnant now, I dimly remember those dark days of being sick, but it's as if a veil has dropped over them. Even though Kaylee is not yet here, all that I went through is already worthwhile. I understand a little better now about my role as a steward of my child and how God has entrusted that stewardship to me. It is both more horrible and more wonderful than I thought it would be. And maybe, just maybe, I understand a little better how to love my family as God loves me.

It is both more horrible and more wonderful than I thought it would be. 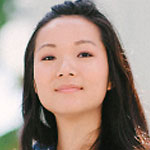 Aimee Sher is a private piano instructor, baking enthusiast, and soon-to-be mother. She is thrilled to participate in the INHERITANCE family again after some time away, and share a new part of her journey with everyone!