Vagina, Penis, and Being Created as Sexual Beings

“DADDY, I HAVE A VAGINA and you have a penis, because I'm a girl and you are a boy."

I can't remember which one of my daughters said this. It's either daughter No. 2 or No. 3, but I think it was No. 2 because she's the more playful one. It must have been when she was around 2 to 3 years old. I was resting on the sofa, just minding my own business, when she comes up and says this whole bit about the vagina and penis.

Feeling just a bit awkward, I try to distract her to move on to some other more appropriate topic. "OK, that sounds good. Did you have a good time playing with your mommy?"

With a bit of a tortured face that communicated something like, "I really don't want this to become a part of her regular vocabulary," I say, "Umm. Baby. Maybe, you can just say ëprivate parts'. Hmm?"

Like a preying lion sensing a weak gazelle, she realizes that she's getting a "fun" reaction out of me, so she starts laughing, running around, and shouting, "Vulva! Vulva! Vulva!"

I think to myself, "Oh dear God, please make it stop!"

Actually, I think I said that out loud. I knew exactly who to be upset at, and who was responsible for this little situation. In the midst of the screaming, I found my wife in the other room and in my self-righteousness, began interrogating her about how she allowed this to happen. How our little baby girl got exposed to all these adult words — I would just like
to know!

Her response left a deep impression on me: "The kids need to know the proper names for their body parts, and those are the correct anatomical terms. Also, they're girls — for their safety, we need to teach them what their body parts are called, and what is appropriate touching and what is not.

Now, you, as their father, need to stop getting weirded out by this, as if they should be ashamed of their bodies. Being comfortable in their bodies, including their sexual bodies, will be increasingly important and help them as they mature. So stop your fussing and get it together!"

Wow! Not what I expected. But she was right. Why was I so weirded out by these words, when in fact, those were the correct names and not lewd slang? Then, even deeper, how did I feel about our sexual bodies? Not just theirs and mine, but even all of ours? What did I feel and believe about people being made as sexual beings? Could I even connect with God with my sexual body? Of course, I remember hearing so much about lust and sexual purity in church. But that's not the same thing as understanding our basic created sexuality; God created us as sexual beings, and saw that it was good.

A Double Whammy for our Sexual Bodies

The church has a long history of rejecting or repressing not only sexual immorality, but human sexuality itself. In the early church, heterodox movements like Gnosticism, Manichaeism, and Marcionism all had difficulties with the idea of a good physical creation and a good body. Distorted by Greek ascetic philosophy, these movements perceived our bodies as immoral and beastly prisons that we will finally be freed of when we die and go to heaven. Actually, it's very easy to believe that we'll float around like spirits in heaven when the creeds and Bible clearly affirm a bodily resurrection — like how Jesus was resurrected from the dead, walked around, and even
ate food.

Heavily influenced by these gospel-distorting movements, the early church considered sex an inconvenience at best and a terrible source of evil at worst. In this vein, a "truly spiritual person" had to be celibate, and married people were considered second-class citizens in the kingdom of God.

Even within marriage, sex was heavily stifled. For example, in the Middle Ages, the European church had a long list of days when you couldn't have sex, which included Lent, Advent, Whitsun week, Passion week, Sundays, Wednesdays, Fridays, Saturdays, etc. When sex was affirmed, it was mainly in a functional manner for procreation, like it was duty and work, and not for pleasure as well. Things have definitely turned around in the place of celibacy and marriage since the Reformation for the Protestant church, the sexual revolution of the 1960s, and the current porn explosion. However, the ubiquity of sex, much of it promiscuous, does not spell out a more healthy affirmation of our sexual bodies.

Our Asian heritage, especially with Confucian and Buddhist influences, only aggravate the issue. While Taoism and Hinduism affirm our sexual bodies, Asian and Asian American Christianity resonate more closely and therefore retain strains of Confucian moralism and Buddhist asceticism. Therefore, because of our Asian heritage, we either repress our sexuality or reject any bodily pleasure altogether. Of course, American media's oversexualizing of Asian American women and asexualized stereotyping of Asian American men make things so much worse. Being both Christian and Asian American can feel like a double whammy for our sexual bodies.

If the church didn't become anti-Semitic, losing its roots in Judaism to Greek ascetic influences, the story might have been different for our sexual bodies as we remember that we are grafted to Israel through faith in Christ and that we worship a Jewish Messiah.

For example, in orthodox Judaism, daily pleasures and joys are not marginalized, but regularly affirmed as God's blessings, and more importantly, they are enjoyed in God's presence. Every week, during the Shabbat meal, there is Kiddush, a prayer of blessing over the wine, which represents joy and pleasure of life. In the Jewish tradition or the Old Testament tradition, there is no radical rejection of the body. It turns out that among Orthodox Jews, the case of alcoholism is minimal, while it's a big problem among teetotal Baptists. Rabbis consider the Sabbath a perfect time for marital sex, as if you get brownie points for celebrating life during this holy time.

The Bible has a whole book on celebrating sex, Song of Solomon, although many would rather see this book allegorically to cover up their own discomfort.

Without a fundamental affirmation of our human sexuality, our teachings, discussions, and reflections about our sexual ethics go awry. This is not just about how we can have great sex within marriage, but rather how we were created as sexual beings.

The basic rule of Christian life and discipleship is that the indication of what God has done and is doing comes first, and thereby establishes imperatives that guide our lives. For example, God has saved through Christ so we can be called to live out that salvation. This order of indicative-imperative comes from understanding how the gospel works in
our lives.

Knowing that we are created as sexual beings by God's pleasure and grace informs how we are called to live joyous, pure, and faithful sexual lives.

Prayer of Blessing in the Shower

All this means that we must first and foremost be very comfortable in our own bodies — our sexual bodies. Repression always has a way of leaking out in some form, often in deviant, shame-filled, or secretive expressions. As I have struggled with lust, sexual temptations, and pornography at different times in my life, I have found that affirming my sexual body is a crucial step toward freedom from these distortive forces. Without this affirmation, our sexuality can become almost equated with sexual immorality. To know that there is a basic sexual desire that is good helped me to not think that my own body was dirty and shameful, that what I must reject is not my sexual body, but desires gone astray.

There is a level of sexuality that is just human. It's one thing to find yourself sexually aroused, it's another to dwell in that and allow wayward thoughts and actions lead to sin. It sounds like a fine line, but the distinction is important if we are going to affirm the truth about ourselves.

In affirming my sexual body, I have learned to pray and bring my naked body into God's presence in the shower. I thank God for my sexual organs and acknowledge that this is part of who I am in Christ while being very comfortable with all this. Along with our minds and our hearts, we should also remember to offer up to God our bodies and our sexual parts.

Oh yes. Another practice is to not get all flustered when my little daughters run around naked or shout out, "Vulva! Vulva! Vulva!", but to know that rightly naming body parts is another way of affirming God's good creation, our sexual bodies. 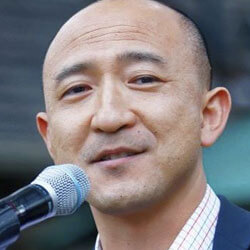 Daniel D. Lee, Ph.D., is the assistant provost for the Center for Asian American Theology and Ministry and assistant professor of theology and Asian American ministry at Fuller Theological Seminary. He lives in Southern California with his wife and three daughters and enjoys hiking, bouldering, and eating good food.