Part of 4 of in
by Esther Cho with Sarah Park
ILLUSTRATIONS BY HWANHEE KANG
Feb 01, 2017 | min read
Part of 52: Lament
11 Snaps
11 0 Snaps
Oops! Something went wrong while submitting the form.

My parents explained the news to me once in a while, but it wasn't until college that I realized how my view of the news was shaped by how my parents viewed the world. My brother and I were often sheltered from the harder realities of the world, so as a child, the news was just a lot of pictures of bad things happening somewhere far away.

Then I started to recognize places that were closer. When the Los Angeles riots were happening, I remember a lot of pictures on TV of buildings on fire.

In eighth grade, I remember thinking how strange it was for a TV to be on in the classroom as we watched the World Trade Center Twin Towers fall.

When there was a shooter at Virginia Polytechnic Institute and State University, I remember thinking, "Why did he have to be Korean? His last name is Cho and my last name is Cho." After reading through article after article, I searched for a video on how to protect yourself if there's a shooter on campus.

Over time, my relationship with the news has gone from seeing it as an irrelevant and boring "current events" high school project to something truly crippling. The overwhelming amount of content, angles, and graphics on social media — where I get most of my news these days — is relentless. The Ohio State University shooting. The Dakota Access Pipeline. Hate crimes. Videos or posts about Black men getting shot — this always caught me — it happens over and over and over again. I see all these things because of what my friends post, and all the time, it makes me so sad.

The overwhelming amount of content, angles, and graphics on social media is relentless.

The world is so big and there's always something not good. Even though I believe in a God who can bring change, it feels hopeless and hard. I feel guilty because I feel like I should feel on fire again, because "God's going to change this!" But instead I feel paralyzed. And I feel like I shouldn't feel guilty as a Christian. Or sad.

Even though I believe in a God who can bring change, it feels hopeless and hard.

I think the guilt that I feel is one of not fully knowing what to do while facing the enormity of the world's problem — or wanting to not care because it's so much easier to be distant than to enter into the mess. I'd rather watch videos of fuzzy pandas and puppies just to feel better. But God loves the world, and if God's hurting, should I not be hurting, too?

Simply believing in Jesus doesn't feel like enough. But as I look at different friends engaging local and national issues, I feel that I don't have the necessary skills to offer something to the world. Maybe my mom's voice is playing through my mind, saying that I actually have nothing to offer. Let me simply invest in my students who are going to make the difference — not me.

Why am I so afraid? That perhaps I will fail and my efforts will result in nothing? Does my brokenness contribute to the hurt and sadness in this world? Yes. So why should I keep adding my mistakes to that? I'm so scared to even fail in trying to help society. Maybe I'm afraid to commit to the things that I know I should be doing, but the commitment feels too hard. Sometimes the problems in my life feel more than enough.

I just don't want to read the news sometimes! I'm a feeler, and my intense empathy kicks in when I read the news. Even when reading my friends' biased posts, I feel what they feel. I want to turn off my emotions to be able to function. A friend once told me that such empathy is a super power, but it feels more like a curse because I get so stuck in the reality of what's happening. It was taking such an emotional toll on me that I eventually found this extension for Google Chrome that wipes out your newsfeed. My newsfeed doesn't show or account for everything else that's online though.

I remember last summer when I was in Thailand leading a mission trip. Even though we were there without communication, our hosts turned on the news or a channel with American content to be hospitable. It showed Black men getting shot: Alton Sterling and Philando Castile. That had just happened. We went halfway around the world, and this is what America is known for? We had our own time of prayer and lament, because even though we were there to serve and love the people of Thailand, here we were crying out for our own country. It felt so heavy to bring that into the trip — this element of "we can't ignore" even though we were away and disconnected.

At my church, I took this course on how we can respond to injustices. And it started with how we read the news. First, the teacher encouraged us to read everything critically. I realized that watching other people's reactions taught me how to react to the news, too. When people post things, they post it with their emotions or opinion attached. Depending on how much I trust this friend, it's easy to sway in their direction.

Knowing there's no way to appease both sides, it's hard to engage when I see so much division online and where there are protests across the nation and on my campus. Creating and maintaining harmony is such a value in Asian culture — I get deeply bothered by the news. So in the midst of reading the news from multiples angles, the course also challenged me to consider having a biblical perspective: What is God's perspective versus whatever the angle or bias of the article is?

Creating and maintaining harmony is such a value in Asian culture — I get deeply bothered by the news.

We can't address what's real until we see a clear picture of reality. Then, we can start adjusting for the groups of people who are hurting. This is how to change the system versus putting out the fire for the moment. Despite how much of the present I want to alleviate — including the sadness I feel — the entrenched causes for these constant cycles and patterns of injustice need uprooting. I see amazing people stepping into that, but I'm still figuring out how to do that in my own Southern California bubble.

I had a couple of Black students who were really hurting and I had to wonder, how do I partner with them in a way they want to be partnered with, that doesn't impose myself on them? The best way I know how to do that so far is to hear their story before I move forward. Even in a ministry, when my students want to start a new Bible study, I ask, "What's the story? Who's the person you're thinking of?" Stories compel people to action or move them into exploring more.

I need that. Stories in the news compel me to move forward, to think beyond my own life of what justice can look like, to care, and to know. The news keeps me connected to God's heart for this very real and terrible reality we live in.

The news keeps me connected to God's heart for this very real and terrible reality we live in.

More recently, I've been holding onto the story in Mark of a man named Jairus. He had a little girl and asked Jesus to come heal her because she was dying. What happened was this: Jesus was on His way to heal this girl, but He got interrupted by a bleeding woman and she's healed instead. He paused to address her, and in the midst of that, the little girl died.

One of Jairus' servants said to not bother with the Teacher anymore. I resonate with that, because in my mind, the news feels like, "Jesus, stuff went down and You weren't there to address it. That sucks. Great." But Jesus said to Jairus, "She's not dead; just believe. Don't have fear." I've been reflecting on how oftentimes things feel final — it feels like death — with sadness around it. But do I believe in a God who actually rises above death? We sing this in church all the time, "Jesus defeated death!" but sometimes, it really feels like other powers have won — that death has won.

What kind of world do we live in? Did Jesus really come back? I can't even imagine what redemption would look like, because the world looks too far gone. If God's going to save us, and justice is not looking like what I want it to look like, then I don't know.

I hold onto this shred of hope: Jesus defeated death. He raised the little girl from death. He even did it again with Lazarus. I'm learning that when things seemed final, they actually were not. Whether people are lepers, are being kicked out of society, or are in a certain social position that feels like death, there's a restoration of life that is given back. I cannot afford to forget this in the midst of all the sad news. 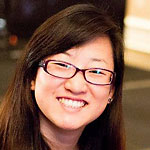 Esther Cho is a Korean American woman working for InterVarsity Christian Fellowship, South Orange County. Feel free to hit her up if you want to grab breakfast burritos by the beach.