Our Stories of Suffering

A FEW YEARS ago, a friend was working on a documentary on the immigrant story. He asked if he could tell parts of my childhood story of growing up in an inner-city neighborhood in Baltimore. My friend and I later returned there to shoot footage of my old stomping grounds.

When I was in elementary school, my dad left our family, and we moved to this impoverished area, comprised of poor Blacks, poor whites, and recent Korean immigrants. It was a rough neighborhood and I hadn't been back since we moved out.

My friend and I drove around the neighborhood and shot some stock footage of the low-income apartment complex that was still standing. My friend was approached by some of the current residents who saw him brandishing a camera and wanted to know what we were doing.

"We're filming a documentary about a guy who used to live in this building."

I chuckled at the image of myself even remotely looking like a hip-hop artist.

Less amusing was another resident's guess: "Was he shot?"

a story of hardship

To this day, I am uncomfortable with silence. I developed this discomfort while living in Baltimore. We didn't have a TV or a radio, so the house was silent all the time. My mom was working 20 hours a day, six days a week, and my older sisters were working part-time jobs. I was often home alone in an eerily silent apartment. I didn't like it, but knew my mom was working hard to keep our family together.

My mom suffered much as an immigrant to the United States. She had followed her husband with four kids in tow to come to this foreign country, to pursue the American dream. But when her husband abandoned her, she did everything in her power to prevent the dream from becoming a nightmare. Her resolve and commitment kept our family together. In many ways, we were able to achieve aspects of the American dream, but there were certainly parts of the story that were nightmarish.

As a single mom with limited language skills, she worked long hours at two different jobs. During the day, she worked a 12-hour shift at a Baltimore inner-city carryout — frying chicken, making steak subs and fish sandwiches. When her shift ended at 11 p.m., she'd head over to work the graveyard shift at an inner-city nursing home as a nurse's aide — changing bedpans and keeping watch through the night. Then, she'd return home in time to wake her children, make breakfast, and catch a short nap before returning to work at the carryout. Those years of poverty and suffering are etched in my mind.

The actual interview, however, proved to be extraordinarily frustrating. The cameras and lights were all set up perfectly. My friend knew how to stage my mom's senior citizen apartment in an artistic way. But my mom was not very forthcoming. I asked her to describe her experience of raising four kids in an inner-city neighborhood as a single mom, to talk about what it was like to work impossibly long hours, to share her experiences of suffering.

After two hours of fruitless exchange, my friend and I left my mom's apartment and got into my car. There was a strange silence. As we drove away, I remarked:

"I'm not sure what happened. I'm really surprised how unwilling she was to talk about our experience. It's almost like she's forgotten about all of the hardships we went through as a family. She seemed to ignore our whole family story."

The futile interview with my mom reminded me that immigrants don't often have the opportunity to share their stories. Or for some reason, like in my mom's case, they are unwilling to share their story. Maybe the pain was too great for my mom; maybe she wanted to keep things bottled up like she had for so many years; maybe she really had forgotten all of the details; or maybe she was just used to nobody listening or caring about her story. Stories of struggle, like my mom's story, often have a great deal of difficulty being told in the triumphalistic modern context of American Christianity.

The reality is, many immigrants have incredible stories of hardship and struggle, and many of those stories are invisible and silent. Growing up in the Korean immigrant church, we heard a lot of these stories discussed by adults and whispered by kids: a family that lost their business or a family that lost their home; the long hours that our parents had to work; the ways our parents were disrespected in public by "Americans". We shared stories of how we were seen as foreigners, even if we were born in the U.S. or lived here most of our lives.

Stories of struggle often have a great deal of difficulty being told in the triumphalistic modern context of American Christianity.

Stories of hardship and suffering in immigrant communities are commonplace. They just aren't heard outside of our own community.

The model minority. The silent minority. Two frequently used phrases to describe the Asian American community. Implicit in these phrases is the assumption of invisibility.

Maybe there are a number of Asian Americans who live up to this stereotype — Asian Americans who are good at math, become law-abiding engineers and diligently work long hours during the week, faithfully drive their Lexus SUVs to church on Sunday, and vote based on conservative values. Maybe we are held up by the white majority as an example to the other minority groups: "What is wrong with you people? Why can't you be like the hardworking Asians who pull themselves up by their own bootstraps?" Maybe our silence was the price to pay for our status as honorary white people. Maybe there is some validity to the perspective of Asians being the model minority and the silent minority.

Maybe our silence was the price to pay for our status as honorary white people.

But that doesn't make it right — it doesn't diminish the loss of these important stories of struggle.

One, it hears the stories of success in order to lift up the Asian American community as a model minority. A mainline denomination in New England consistently bragged about one of their churches being one of the fastest growing churches in the region. The church was a Korean immigrant church. It was the only church in their denomination not hemorrhaging membership in their region. The church was marginally connected to the denomination, but that didn't stop denominational officials from taking the credit. Immigrants are allowed to be seen and heard, but only when it serves the needs of the majority culture.

Two, it seeks to silence stories of struggle or protest that arise out of the context of the immigrant community. These stories belong to "the other", and painful stories from "the other" should be neither seen nor heard. But it is an injustice for our voices to be silent. It does not honor our mother and our father. It does not reflect the character of God's justice.

Because sadness is an affront to the dominant narrative of American exceptionalism, lament as a legitimate expression of Christian faith is lost.

Because sadness is an affront to the dominant narrative of American exceptionalism, lament as a legitimate expression of Christian faith is lost.

Lament expresses the struggles of God's people. It is a legitimate and vital expression of the marginalized against the powers that be. However, in American Christian worship, lament has been largely ignored.

Old Testament scholar Denise Hopkins examined the use of lament in the major liturgical denominations in the U.S. In "Journey Through the Psalms", she stated that "the majority of Psalms omitted from liturgical use are the laments". In "Hurting with God: Learning to Lament with the Psalms", Glenn Pemberton found that hymnals used by American congregations severely underrepresented laments as compared to the prevalence of laments in the Psalms.

From my own analysis of contemporary Christian music, our top 100 worship songs skew disproportionately toward triumphalistic victory and away from lament and suffering.  When communities within American Christianity express lament, it is often stifled because it does not fit the triumphalistic narrative. Sorrow and sadness have no place in the church.

As I wrote in my book "Prophetic Lament: A Call for Justice in Troubled Times", "Feelings of shame generate the desire to cover up in contrast to the exposure that occurs. The shamed person wants to hide ... " Guilt can be dealt with in private; shame must be dealt with in public. Shame cannot be revealed in a culture where an immigrant is told that sharing their experience of pain is inappropriate. This reality may explain my mother's hesitation to speak of her pain.

But the pain and sadness persists. In Korean culture, the theological concept of han expresses the attempt to address a culture of suffering. Korean theologian Young-Hak Hyun defines han as "a sense of unresolved resentment against injustice suffered, ... a feeling of acute pain of sorrow in one's guts and bowels." The language of han provides theological depth to our understanding of sorrow — for victims of sin and oppression to feel the pain of han. While we create room in the American church for the confession of sin, we do not leave enough room for the expression of lament that emerges from the reality of han. Our lament is deemed inappropriate. Our han finds no expression. Our sadness, therefore, is silenced.

In Korean culture, the theological concept of han expresses the attempt to address a culture of suffering.

If silence is the price of being honorary white people, we should shout, "No, thank you!" We don't need the honor of being a model minority if that requires being a silent minority. We raise our voices so that our concerns might be heard. We raise our voices for the sake of our children, for the untold stories of our parents. And if in that process we are told that our voices are unwelcome, we will continue to shout. For the LORD has empowered us to sing a new song, a song of deliverance. 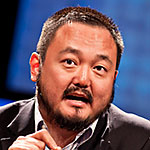 Rev. Dr. Soong-Chan Rah is Milton B. Engebretson Professor of Church Growth and Evangelism at North Park Theological Seminary in Chicago, IL and the author of The Next Evangelicalism; Many Colors; Prophetic Lament; co-author of Forgive Us; and Return to Justice. Soong-Chan and his wife Sue and their two children, Annah and Elijah, live in Chicago.